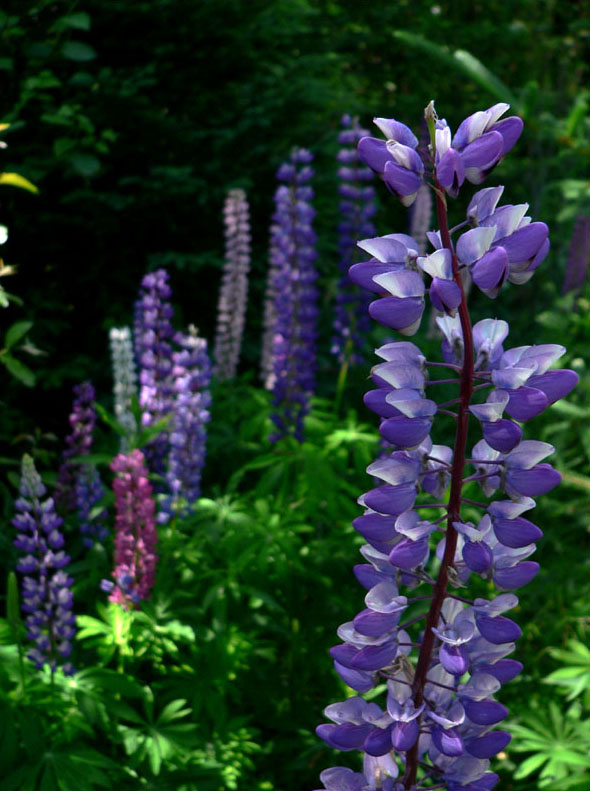 Lupin, often spelled lupine in , is the common name for members of the "Lupinus" in the legume family (). The genus comprises between 200-600 , with major centers of diversity in South America and western North America - [http://personal.inet.fi/tiede/lupin/Classific.htm subgen.Platycarpos] ) and [http://personal.inet.fi/tiede/lupin/Classific.htm subgen. Lupinus] - in the Mediterranean region and Africa. [Ainouche & Bayer (1999)]

The species are mostly s 0.3-1.5 m (1-5 ft) tall, but some are s and a few are s up to 3 m (10 ft) tall - see also -, with one species ("", from the Mexican state of ) a up to 8 m high with a trunk 20 cm (8 in) in diameter. They have a characteristic and easily recognised shape, with soft green to grey-green leaves which in many species bear silvery hairs, often densely so. The leaf blades are usually ly divided into 5–28 leaflets or reduced to a single leaflet in a few species of the southeastern United States. The s are produced in dense or open whorls on an erect spike, each flower 1-2 cm long, with a typical flower shape with an upper 'standard', two lateral 'wings' and two lower s fused as a 'keel'. Due to the flower shape, several species are known as s or . The is a pod containing several s.

Like most members of their family, lupins can fix nitrogen from the atmosphere into , fertilizing the for other plants. The genus "Lupinus" is d by "" soil bacteria [Kurlovich "et al." (2002)] . Some species have a long central s, or have s.

The yellow seeds of lupins, commonly called , were popular with the Romans, who spread the plant's cultivation throughout the Roman Empire; hence common names like "lupini" in . Lupin beans are commonly sold in a salty solution in jars (like s and s) and can be eaten with or without the skin. Lupins are also cultivated as and legumes.

"Lupini" dishes are most commonly found in Mediterranean countries, especially in , , and , and also in and in , where they are popularly consumed with . The Andean variety of this bean is from the ("tarwi, L. mutabilis") and was a widespread food in the . The Andean Lupin and the "L. albus" (), "L. angustifolius" () [Murcia & Hoyos ( [1998] )] and "" [Hedrick (1919): 387-388] are also edible after soaking the seeds for some days in salted water [Azcoytia, Carlos: [http://www.historiacocina.com/historia/articulos/altramuces.htm Historia de los altramuces. Un humilde aperitivo.] [in Spanish] ] . They are known as "altramuz" in and . In Portuguese the lupin beans are known as "tremoços", and in () as "tirmis"Verify source|date=October 2007. Lupins were also used by Native Americans in , e.g. the .

These lupins are referred to as sweet lupins because they contain smaller amounts of toxic s than the bitter lupin varieties. Newly bred variants of sweet lupins are grown extensively in Germany; they lack any bitter taste and require no soaking in salt solution. The seeds are used for different foods from sausages to lupin- or baking-enhancing lupin . Given that lupin seeds have the full range of s and that they, contrary to , can be grown in more temperate to cool climates, lupins are becoming increasingly recognized as a alternative to soy.

Lupin milk is a made from lupin Fact|date=February 2007.

Three Mediterranean species of lupin, Blue Lupin, White Lupin and ("L. luteus") are widely cultivated for livestock and poultry feed. Both sweet and bitter lupins in feed can cause livestock poisoning. is a nervous syndrome caused by alkaloids in bitter lupins, similar to neurolathyrism. is a disease caused by lupin material that is infected with the fungus "" [Williamson "et al." (1994)] ; the fungus produces s called s, which cause liver damage.

On 22 December 2006, the European Commission submitted directive 2006/142/EC, which amends the EU foodstuff allergen list to include "lupin and products thereof".

Lupins are popular s in s. There are numerous hybrids and s. Some species, such as ("Lupinus polyphyllus") and hybrids like the ("L. × regalis") are common garden flowers. Others, such as the ("L. arboreus") are considered invasive s when they appear outside their native range.

In lupins have escaped into the wild and grow in large numbers along main roads and streams on the . The seeds are carried by car tires and water flow, and unfortunately, some tourist shops in the major tourist areas have been reported to have sold packets of lupin seeds, with the instructions to plant, water and watch them grow into a giant beanstalkFact|date=October 2007. They are usually Garden Lupins, principally blue, pink and violet, with some yellow, and are very attractive, providing colourful vistas with a backdrop of mountains and lakes; however, they smother the original vegetation. The New Zealand environment authorities have a campaign to reduce their numbers, although this seems a hopeless task, especially when faced with such ignorance as mentioned above. In fields they seem to be eradicated by sheep, and hence remain largely restricted to ungrazed roadside verges and stream banks.

For several (butterflies and moths), lupins are an important l food. These include:
* "" ()

The most significant diseases of lupins are as well as and diseases caused by "" and other s, and some bacterial and viral diseases. [Golubev & Kurlovich (2002)]

There are two subgenera of the genus Lupinus L.: Subgen. Platycarpos and Subgen. [ [http://personal.inet.fi/tiede/lupin/Classific.htm Lupinus] ]

* lupins, notably the ("Lupinus texensis") are the state flower of , .

* A sketch featured a would-be named Dennis Moore, who stole lupins from the rich and gave them to the poor. Although he was very successful, the poor argued that money or food would be more practical.

* The lupin has also lent its name to , the main character in a series of stories by (the name is a parody of 's ). He was a who first appeared in 1905. The popular Japanese comic book/ character is an unofficial spin-off of this series.

* In the British adventure series "The Avengers", in the episode "Who's Who" it is revealed the gives their agents code name based on flowers worn on the lapel (e.g. "Tulip", "Daffodil", "Rose"). Though he is only seen dead, one agent is clearly wearing a lupin.

* In the children's book "" by , the protagonist plants lupins to make the world a more beautiful place.

* In the Japanese anime "", the character frequently sings a lullaby titled "Lupinus no Komoriuta" ("Lullaby of the Lupins") to baby Hana Makihatayama during season 2.

* As a personal name, "Lupin" is used in two famous works of fiction. In 's comic novel "", the protagonists' son is named Lupin, and in 's series, Harry has a friend and teacher named , who is a .

* In the 2001 Fox Reality TV show Murder in Small Town X, the leaders of the fictional town of Sunrise had a secret society called the "The Order of the Scarlet Lupine."