Sir Timothy John "Tim" Berners-Lee, OM, KBE, FRS, FREng, FRSA (born 8 June 1955[1]), also known as "TimBL", is a British computer scientist, MIT professor and the inventor of the World Wide Web. He made a proposal for an information management system in March 1989[2] and on 25 December 1990, with the help of Robert Cailliau and a young student at CERN, he implemented the first successful communication between a Hypertext Transfer Protocol (HTTP) client and server via the Internet.[3]

Berners-Lee is the director of the World Wide Web Consortium (W3C), which oversees the Web's continued development. He is also the founder of the World Wide Web Foundation, and is a senior researcher and holder of the 3Com Founders Chair at the MIT Computer Science and Artificial Intelligence Laboratory (CSAIL).[4] He is a director of The Web Science Research Initiative (WSRI),[5] and a member of the advisory board of the MIT Center for Collective Intelligence.[6][7]

In 2004, Berners-Lee was knighted by Queen Elizabeth II for his pioneering work.[8] In April 2009, he was elected a foreign associate of the United States National Academy of Sciences, based in Washington, D.C.[9][10]

Tim Berners-Lee was born in southwest London, England, on 8 June 1955, the son of Conway Berners-Lee and Mary Lee Woods. His parents worked on the first commercially built computer, the Ferranti Mark 1. One of four children, he attended Sheen Mount primary school, and then went on to Emanuel School in London, from 1969 to 1973.[8] He studied at The Queen's College, Oxford, from 1973 to 1976, where he received a first-class degree in Physics.[1] 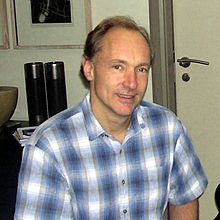 While being an independent contractor at CERN from June to December 1980, Berners-Lee proposed a project based on the concept of hypertext, to facilitate sharing and updating information among researchers.[11] While there, he built a prototype system named ENQUIRE.[12]

After leaving CERN in 1980, he went to work at John Poole's Image Computer Systems, Ltd, in Bournemouth, England.[13] The project he worked on was a real-time remote procedure call which gave him experience in computer networking.[13] In 1984 he returned to CERN as a fellow.[12]

In 1989, CERN was the largest Internet node in Europe, and Berners-Lee saw an opportunity to join hypertext with the Internet: "I just had to take the hypertext idea and connect it to the Transmission Control Protocol and domain name system ideas and—ta-da!—the World Wide Web."[14] “Creating the web was really an act of desperation, because the situation without it was very difficult when I was working at CERN later. Most of the technology involved in the web, like the hypertext, like the Internet, multifont text objects, had all been designed already. I just had to put them together. It was a step of generalizing, going to a higher level of abstraction, thinking about all the documentation systems out there as being possibly part of a larger imaginary documentation system.”[15] He wrote his initial proposal in March 1989, and in 1990, with the help of Robert Cailliau (with whom he shared the 1995 ACM Software System Award), produced a revision which was accepted by his manager, Mike Sendall.[16] He used similar ideas to those underlying the ENQUIRE system to create the World Wide Web, for which he designed and built the first Web browser, which also functioned as an editor (WorldWideWeb, running on the NeXTSTEP operating system), and the first Web server, CERN HTTPd (short for Hypertext Transfer Protocol daemon).

" Mike Sendall buys a NeXT cube for evaluation, and gives it to Tim [Berners-Lee]. Tim's prototype implementation on NeXTStep is made in the space of a few months, thanks to the qualities of the NeXTStep software development system. This prototype offers WYSIWYG browsing/authoring! Current Web browsers used in "surfing the Internet" are mere passive windows, depriving the user of the possibility to contribute. During some sessions in the CERN cafeteria, Tim and I try to find a catching name for the system. I was determined that the name should not yet again be taken from Greek mythology. Tim proposes "World-Wide Web". I like this very much, except that it is difficult to pronounce in French..." by Robert Cailliau, 2 November 1995.[17]

The first web site built was at CERN, and was first put online on 6 August 1991:

"Info.cern.ch was the address of the world's first-ever web site and web server, running on a NeXT computer at CERN. The first web page address was http://info.cern.ch/hypertext/WWW/TheProject.html, which centred on information regarding the WWW project. Visitors could learn more about hypertext, technical details for creating their own webpage, and even an explanation on how to search the Web for information. There are no screenshots of this original page and, in any case, changes were made daily to the information available on the page as the WWW project developed. You may find a later copy (1992) on the World Wide Web Consortium website." -CERN

In 1994, Berners-Lee founded the W3C at MIT. It comprised various companies that were willing to create standards and recommendations to improve the quality of the Web. Berners-Lee made his idea available freely, with no patent and no royalties due. The World Wide Web Consortium decided that its standards should be based on royalty-free technology, so that they could easily be adopted by anyone.[22]

In 2001, Berners-Lee became a patron of the East Dorset Heritage Trust, having previously lived in Colehill in Wimborne, East Dorset, England.[23]

In December 2004, he accepted a chair in Computer Science at the School of Electronics and Computer Science, University of Southampton, England, to work on his new project, the Semantic Web.[24][25] 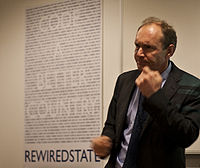 In June 2009 then British Prime Minister Gordon Brown announced Berners-Lee would work with the UK Government to help make data more open and accessible on the Web, building on the work of the Power of Information Task Force.[26] Berners-Lee and Professor Nigel Shadbolt are the two key figures behind data.gov.uk, a UK Government project to open up almost all data acquired for official purposes for free re-use. Commenting on the opening up of Ordnance Survey data in April 2010 Berners-Lee said that: "The changes signal a wider cultural change in Government based on an assumption that information should be in the public domain unless there is a good reason not to—not the other way around." He went on to say "Greater openness, accountability and transparency in Government will give people greater choice and make it easier for individuals to get more directly involved in issues that matter to them."[27]

In November 2009, Berners-Lee launched the World Wide Web Foundation in order to "Advance the Web to empower humanity by launching transformative programs that build local capacity to leverage the Web as a medium for positive change."[28]

Berners-Lee is one of the pioneer voices in favour of Net Neutrality,[29] and has expressed the view that ISPs should supply "connectivity with no strings attached," and should neither control nor monitor customers' browsing activities without their expressed consent.[30][31] He advocates the idea that net neutrality is a kind of human network right: "Threats to the Internet, such as companies or governments that interfere with or snoop on Internet traffic, compromise basic human network rights."[32]

In a Times article in October 2009, Berners-Lee admitted that the forward slashes ("//") in a web address were actually "unnecessary". He told the newspaper that he could easily have designed URLs not to have the forward slashes. "There you go, it seemed like a good idea at the time," he said in his lighthearted apology.[33] 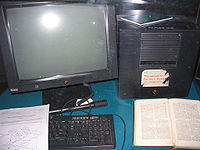 This NeXT Computer was used by Berners-Lee at CERN and became the world's first web server.

Berners-Lee had a religious upbringing, but left the Church of England as a teenager, just after being confirmed and "told how essential it was to believe in all kinds of unbelievable things". He and his family eventually joined a Unitarian Universalist church while they were living in Boston. They now live in Lexington, Massachusetts.[54]