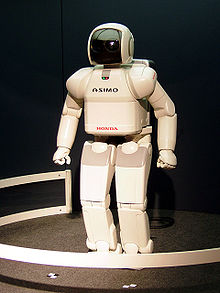 Honda's ASIMO is an example of a humanoid robot.

A humanoid (pronounced /ˈhjuːmənɔɪd/; from English human and -oid "resembling") is something that has an appearance resembling a human being. The term first appeared in 1912 to refer to fossils which were morphologically similar to, but not identical with, those of the human skeleton.[1] Although this usage was common in the sciences for much of the 20th century, it is now considered rare.[1] More generally, the term can refer to anything with uniquely human characteristics and/or adaptations, such as possessing opposable appendage (thumbs) or the ability to walk in an upright position.

An android (male) or gynoid (female) is a humanoid robot designed to look as much like a real person as possible, although these words are frequently perceived to be synonymous with humanoid.

Similarly to robots, virtual avatars may also be called humanoid when resembling humans.

With regard to extraterrestrials in fiction, the term humanoid is most commonly used to refer to alien beings with a body plan that is generally like that of a human, including upright stance and bipedalism.

Many aliens in television and science fiction films are presented as humanoid. This is usually attributed to budget constraints, as human actors can more easily portray human-like aliens.[citation needed]

In much of science fiction, the reason for the abundance of humanoid aliens is not explained and requires suspension of disbelief. In some cases, however, explanations have been offered for this. In Star Trek, the abundance of humanoid aliens within the Star Trek universe is explained by advancing the story of a primordial humanoid civilization, the Ancient humanoids, who seeded the galaxy with genetically-engineered cells to guide the evolution of life on a multitude of worlds toward a humanoid form.[2] In the television series Stargate SG-1, the Jaffa are explained as being an offshoot of humanity bred by the Goa'uld to suit their purposes, hence their almost-human appearance and physiology, while many other "alien" characters are actually the descendants of humans who were removed from Earth by the Goa'uld for use as slaves. Similarly, in its spin-off show Stargate Atlantis, the explanation offered for the humanoid appearance of the Wraith is that the Wraith evolved from a parasite which incorporated human DNA into its own genome after feeding on humans, giving the Wraith their present form.[3] Also present in Stargate is the concept of convergent evolution, in the species known as Ancients.

In the field of ufology, humanoid refers to any of the claimed extraterrestrials which abduct human victims, such as the Greys,[4] the Reptilians,[5] Nordics, and Martians.

In fantasy settings the term humanoid is used to refer to a human-like fantastical creature, such as a dwarf or an ogre. In some cases, such as older versions of the game Dungeons and Dragons, a distinction is made between demi-humans, which are relatively similar to humans, and humanoids, which exhibit larger differences from humans.