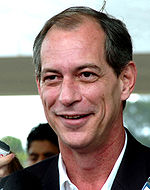 Ciro Ferreira Gomes (born Pindamonhangaba, 6 November 1957) is a Brazilian lawyer and politician. He was a founding member of the then-center-left Brazilian Social Democracy Party (PSDB), but left the party in 1996. He later moved to the Socialist People's Party (PPS) and ran as the PPS' presidential candidate in 1998 and 2002. In 1998 he came in third place and won 11% of the vote, and in 2002 he came in fourth place and won 12% of the vote. He supported Luiz Inácio Lula da Silva in the second round of the latter election, and was ultimately chosen to be the Minister for National Integration in Lula's new government. When the PPS' leadership voted to leave the governing coalition in December 2004, Gomes chose to remain in his post. As a result, the PPS removed him from the party leadership, and he decided to join the Brazilian Socialist Party (PSB). In 2006 he was elected to the Chamber of Deputies with the highest percentage ever achieved by a single candidate in a proportional election - 16.7%.[citation needed]

Ciro Gomes became governor of the Brazilian northeastern state of Ceará in 1990, at the age of 32. The three and a half years he spent as governor coincided with important social reforms. He attracted much international investment, and Unicef praised him for cutting infant mortality by a third.

He also famously built a water canal 71 miles long in only 90 days to Fortaleza, the capital, to prevent a water supply crisis.

In 1994 he briefly served as finance minister at a crucial time when the Real Plan was underway as an economic stabilization program. His performance helped Fernando Henrique Cardoso win the election, but he broke with the Cardoso government in 1997.

He is married to actress Patrícia Pillar.