All the President's Men (film)

All the President's Men (film) 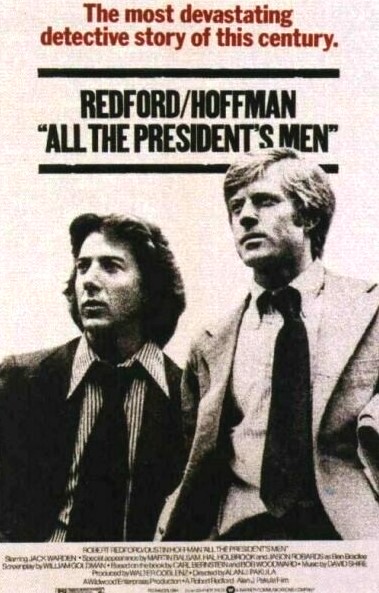 
"All the President's Men" is a film based on the 1974 non-fiction book by and , the two journalists investigating the for the "". The film starred and as Woodward and Bernstein, respectively; it was produced by Walter Coblenz and directed by .

The book, also titled "All the President's Men", was adapted for the screen by . The story chronicles the Pulitzer Prize-winning of Woodward and Bernstein from the former's initial report on the Watergate break-in through the resignations of and , and the revelation of the Nixon tapes by in 1973. It relates the events behind the major stories the duo wrote for the "Post", naming some sources who had previously refused to be identified for their initial articles, notably . It also gives detailed accounts of Woodward's secret meetings with his source whose identity was kept secret for over 30 years. (Only in 2005 was Deep Throat revealed to be former FBI Associate Director ).

According to Redford, they tried to film in the actual "Washington Post" newsroom, but it proved impossible because many "Post" employees were too aware of the camera, and some even tried to "act." Some employees would disappear into restrooms and apply make-up. It was also causing inconvenience to the regular running of the news roomFact|date=September 2008.

The production team recreated the facility at a studio for a reported $450,000. According to the Post, the newspaper did not allow them to film in their newsroom, so the film crew moved shelves and even recreated the stickers on the secretary's desk in order to appear accurate. Regardless, certain scenes were filmed inside and around the actual "Post" building. [ [http://www.washingtonpost.com/wp-srv/style/longterm/movies/features/dcmovies/allthepresidentsmen.htm washingtonpost.com: Style Live: Movies & Videos ] ]

Frank Wills, the Watergate security guard who first discovered the break-in, played himself in the film.

Some scenes in the film use lenses, which allow a "split screen" effect on a single take: each half of a shot can have its own focal length (that is, a man in the foreground can be in focus, yet on the other side of the frame, a man in the background can also be in focus--with objects between the two of them "out of" focus). Use of a dioptric lens requires a sharp dividing line to hide the effect; "All the President's Men" typically used pillars and desks for dividing lines.

The cinematography was done by , who also did "". His specialty was shooting in dark, for which he earned the nickname, "Prince of Darkness." In this movie, most of the shots outside have been filmed in darkness as opposed to the cold, fluorescent light in the newsroom.

The billing followed the formula of James Stewart and in "", with Redford billed over Hoffman in the posters and trailers and Hoffman billed above Redford in the film itself.

Differences from the book

Unlike the book, the film itself only covers the first seven months of the Watergate scandal, from the time of the break-in to Nixon's inauguration on . A series of teletype headlines then tell the rest of the story. Although the headlines cover a period through 1975, they are not shown in strict chronological order, so as to end with the dramatic announcement of Nixon's resignation in August 1974.