Halifax was the son of Sir Francis Wood, 2nd Baronet, and his wife Anne, daughter of Samuel Buck. He was educated at Eton and Oriel College, Oxford, where he studied classics and mathematics.

A Liberal and Member of Parliament from 1826 to 1866, Wood served as Chancellor of the Exchequer in Lord John Russell's government (1846–1852), where he opposed any further help for Ireland during the Great Famine there. Wood later served as President of the Board of Control under Lord Aberdeen (1852–1855), as First Lord of the Admiralty in Lord Palmerston's first administration (1855–1858), and as Secretary of State for India in Palmerston's second government (1859–1866). He succeeded to his father's baronetcy in 1846, and in 1866 he was elevated to the peerage as Viscount Halifax, of Monk Bretton in the West Riding of the County of York. [1]

As the President of the Board of Control, Wood did a yeoman's job in spreading education in India when in 1854 he sent a despatch to Lord Dalhousie, the then Governor-General of India. It was recommended therein that:

In accordance with Wood's despatch, Education Departments were established in every province and universities were opened at Calcutta, Bombay and Madras in 1857 and in Punjab in 1882 and at Allahbad 1887. 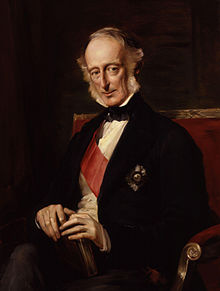 An 1873 portrait of Lord Halifax by Anthony de Brie.