Ellesmere Port /ˈɛlzmɪərpɔrt/ (originally Netherpool) is a large industrial town and port in the unitary authority of Cheshire West and Chester and the ceremonial county of Cheshire, England. It is situated on the south border of the Wirral Peninsula on the banks of the Manchester Ship Canal, which in turn gives access to the River Mersey, and to the north of the city of Chester. The town had a population of 64,100 as of the 2001 Census.

The town is primarily industrial, being dominated by an oil refinery at Stanlow and a former ICI chemical works. The town is also home to the Vauxhall Motors car factory, where the Astra range of cars is produced. There are a number of tourist attractions: the National Waterways Museum, the Blue Planet Aquarium and the Cheshire Oaks Designer Outlet which is owned by McArthurGlen Group.

The town of Ellesmere Port was founded as an outlet to the sea from Ellesmere, Shropshire and the Welsh border area around Llangollen via a canal initially called the Ellesmere Canal. The canal was designed and engineered by William Jessop and Thomas Telford as part of a project to connect the rivers Severn, Mersey and Dee. The canal connected to the Mersey in the village of Netherpool, and the basin was known as Whitby Locks. The section between Whitby Locks and Chester was opened in 1795, connecting two of the rivers; but the connection to the Severn was never completed. 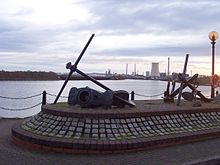 The village of Netherpool gradually changed its name to the Port of Ellesmere, and by the early 19th century, to Ellesmere Port. Settlements had existed in the area since the writing of the Domesday Book (the suburbs of Great Sutton, Little Sutton and Hooton are all mentioned). The first houses in Ellesmere Port itself, however, grew up around the docks and the first main street was Dock Street, which now houses the National Waterways Museum. Station Road, which connected the docks with the village of Whitby, also gradually developed and as more shops were needed, some of the houses became retail premises. As the expanding industrial areas growing up around the canal and its docks attracted more workers to the area, the town itself continued to expand.

By the mid-20th century, thanks to the opening of the Manchester Ship Canal in 1894 and the Stanlow Oil Refinery in the 1920s, the town had expanded so that it now incorporated the villages of Great and Little Sutton, Hooton, Whitby, Overpool and Rivacre as suburbs. The town centre itself had moved from the Station Road/Dock Street area, to an area that had once been home to a stud farm (indeed, the former Ellesmere Port and Neston Borough Council officially referred to the town centre as Stud Farm for housing allocation purposes) around the crossroads of Sutton Way/Stanney Lane and Whitby Road. Demand for housing was further increased with the opening of the Vauxhall Motors car plant in 1962.

Between the 1950s and 1980s, a number of new housing estates were developed, many of them on the sites of former farms such as Hope Farm and Grange Farm. Many estates consisted of both council housing and privately owned homes and flats. In the mid-1980s, the Port Arcades, a covered shopping mall was built in the town centre, which complemented the erection of Lewis's store[citation needed] which was bought out by Asda prior to the completion of the Port Arcades.

Some of the town's more deprived suburbs were hit by rioting (blamed largely on the mass unemployment of that era) in July 1981 in a wave of rioting which hit dozens of other British towns and cities that year.[2]

By the 1990s, it was the retail sector rather than the industrial that was attracting workers and their families to the town. This was boosted with the building of the Cheshire Oaks outlet village and the Coliseum shopping park, which also included a multiplex cinema; prior to this since the closure of the cinema adjacent to the station in the 1950s the town's only cinema had been a single screen in the EPIC Leisure Centre.

The town continues to grow and expand, and more housing estates and shops are being built. The industrial sector is still a major employer in the town although in recent years, a number of factories have been closed and jobs lost. Marks & Spencer are currently (2010) building what is being claimed to be their largest store apart from Marble Arch on a site opposite to the Coliseum shopping park

The Vauxhall plant at Ellesmere Port is now Vauxhall's only car factory in Britain since the end of passenger car production at the Luton plant in 2004 (where commercial vehicles are still made), and currently produces the Astra model. It opened in 1962 as a components supplier to the Luton plant, before passenger car production began there in 1964.[1]

Ellesmere Port was nearly included into the Metropolitan Borough of Wirral, in Merseyside, when that was formed on 1 April 1974. It was removed from the proposals before the Local Government Act 1972 had its first reading, and instead remained in Cheshire as part of the borough of Ellesmere Port and Neston.

In 2007, plans were announced which proposed combining the borough of Ellesmere Port and Neston with the Chester and Vale Royal districts to form a new "West Cheshire" unitary authority.[2] The new unitary authority came into being on 1 April 2009 as Cheshire West and Chester. The Conservatives won control of this council in shadow elections in May 2008, winning a majority of seats in the Ellesmere Port area for the first time.

The official Governor of Ellesmere Port is Gurchuran Singh.

As of the 2001 census, 96.1% of the population described themselves as White British. 2.9% are desribed as Asian or British Asian. 0.6% are described as Chinese and 0.4% are Black African and Other. Many of the ethnic population live in Little Sutton, Hope Farm and Great Stanney.

The main religion of Ellesmere Port is Christianity with 58.9% of the population. 22.3% are unspecified. 10.1% are Muslim. 4.6% are Sikhs. 3.1% are Jewish. 0.6% are Buddists and 0.3% are Shinto and others. Most of the religious groups live in the Town Centre, Little Sutton and Westminster.

Suburban localities of Ellesmere Port include:

Ellesmere Port is located near the interchange of the M56 and the M53 motorways. The A41 road between Birkenhead and Chester, also passes through the area. There is a bus station in the town centre with frequent services to Chester, Liverpool, Runcorn, Elton, Ince,and Neston. There are some services to Mold, North Wales. Occasional National Express coaches serve the bus station. Most services are operated by Arriva North West & Wales, First Chester & The Wirral, GHA Coaches or Helms of Eastham.

Ellesmere Port railway station has frequent electric trains to Liverpool via the Wirral Line of the Merseyrail network. There is also an infrequent service to Helsby, with the route passing through Stanlow and Elton.

The Manchester Ship Canal joins the Mersey estuary north-west of Ellesmere Port at Eastham, but the town is also the northern terminus of the Shropshire Union Canal (which used to exchange goods with sea-going boats at what is now the National Waterways Museum).

Speedway racing operated at the stadium in Thornton Road in the mid to late 1970s and in the 1980s. Ellesmere Port Gunners raced in the lower tier Leagues. Vauxhall Motors F.C. are the local football team.

The following people are natives of Ellesmere Port, or have lived there for a period of time.