Cowry
Not to be confused with kauri.

A print from 1845 shows cowry shells being used as money by an Arab trader.

Cowry, also sometimes spelled cowrie, plural cowries, is the common name for a group of small to large sea snails, marine gastropod molluscs in the family Cypraeidae, the cowries. The word cowry is also often used to refer only to the shells of these snails, which overall are often shaped more or less like an egg, except that they are rather flat on the underside.

Many people throughout history have found (and still find) the very rounded, shiny, porcelain-like shells of cowries pleasing to look at and to handle. Indeed the term "porcelain" derives from the old Italian term for the cowrie shell (porcellana) due to their similar translucent appearance.[1] Shells of certain species have historically been used as currency in several parts of the world, as well as being used, in the past and present, very extensively in jewellery, and for other decorative and ceremonial purposes.

Some species in the family Ovulidae are also often referred to as cowries. In the British Isles the local Trivia species (family Triviidae, species Trivia monacha and Trivia arctica) are sometimes called cowries. The Ovulidae and the Triviidae are somewhat closely related to the Cypraeidae. 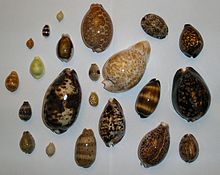 Shells of various species of cowries; all but one have their anterior ends pointing towards the top of the page in this image

The shells of cowries are almost always smooth and shiny and more or less egg-shaped, with a flat under surface which shows a long, narrow, slit-like opening (aperture), which is often toothed at the edges. The narrower end of the egg-shaped cowry shell is the anterior end. The spire of the shell is not visible in the adult shell of most species, but is visible in juveniles, which have a different shape than the adults.

All cowry shells have a porcelain-like shine except Hawaii's granulated cowry, Cypraea granulata. Many have colorful patterns. Lengths range from 5 mm for some species up to 15 cm for the tiger cowry, Cypraea tigris.