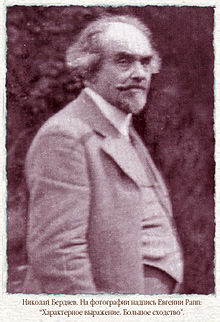 Berdyaev was born in Kiev into an aristocratic military family. He spent a solitary childhood at home, where his father's library allowed him to read widely. He read Hegel, Schopenhauer, and Kant when only fourteen years old and excelled at languages.

Berdyaev decided on an intellectual career and entered the Kiev University in 1894. This was a time of revolutionary fervor among the students and the intelligentsia. Berdyaev became a Marxist and in 1898 was arrested in a student demonstration and expelled from the University. Later his involvement in illegal activities led to three years of internal exile in central Russia—a mild sentence compared to that faced by many other revolutionaries.

In 1904 Berdyaev married Lydia Trusheff and the couple moved to Saint Petersburg, the Russian capital and center of intellectual and revolutionary activity. Berdyaev participated fully in intellectual and spiritual debate, eventually departing from radical Marxism to focus his attention on philosophy and spirituality. Berdyaev and Trusheff remained deeply committed to each other until the latter's death in 1945.

Berdyaev was a believer in Orthodox Christianity but was often critical of the institutional church. A fiery 1913 article criticising the Holy Synod of the Russian Orthodox Church caused him to be charged with the crime of blasphemy, the punishment for which was exile to Siberia for life. The World War and the Bolshevik Revolution prevented the matter coming to trial.

He was a Christian universalist.[1][2] Berdyaev writes with approval that

Berdyaev could not accept the Bolshevik regime, because of its authoritarianism and the domination of the state over the freedom of the individual. Yet, he accepted the hardships of the revolutionary period, as he was permitted for the time being to continue to lecture and write.

His philosophy has been characterized as Christian existentialist. He was preoccupied with creativity and in particular freedom from anything that inhibited said creativity, whence his opposition against a "collectivized and mechanized society".

In September 1922, Berdyaev was among a carefully selected group of some 160 prominent writers, scholars, and intellectuals whose ideas the Bolshevik government found objectionable, who were sent into exile on the so-called "philosophers' ship". Overall, they were supporters neither of the Czarist regime nor of the Bolsheviks, preferring less autocratic forms of government. They included those who argued for personal liberty, spiritual development, Christian ethics, and a pathway informed by reason and guided by faith.

At first Berdyaev and other émigrés went to Berlin, but economic and political conditions in Weimar Germany caused him and his wife to move to Paris in 1923. There he founded an Academy, taught, lectured, and wrote, working for an exchange of ideas with the French intellectual community.

During the German occupation of France, Berdyaev continued to write books that were published after the war—some of them after his death. In the years that he spent in France, Berdyaev wrote fifteen books, including most of his most important works. He died at his writing desk in his home in Clamart, near Paris, in March 1948.