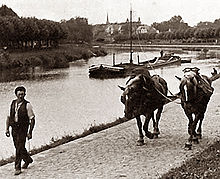 Towpath in use on Finow Canal.

A towpath on the Chesapeake and Ohio Canal. 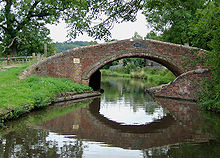 Changeline bridge on the Staffordshire and Worcestershire Canal. The towpath changes to the other side of the canal but the horse does not have to be unhitched

A towpath made in the rock

A towpath is a road or trail on the bank of a river, canal, or other inland waterway. The purpose of a towpath is to allow a land vehicle, beasts of burden, or a team of human pullers to tow a boat, often a barge. This mode of transport was common where sailing was impractical due to rapid current,[citation needed] tunnels and bridges, or unfavourable winds.

After the Industrial Revolution, towing became obsolete when engines were fitted on boats and when railway transportation superseded the slow towing method. Since then, many of these towpaths have been converted to multi-use trails. They are still named towpaths - although they are now only occasionally used for the purpose of towing boats.

Although historically not designed or used as towpaths, acequia ditch banks also are popular recreational trails.