The party originated as Operation Christian Vote, which was founded by Hargreaves in May 2004. It was based in Ilford, London.[2] The party contested the 2004 European Elections in the Scotland constituency,[3] gaining 1.8% of the popular vote.

Hargreaves was a candidate for Operation Christian Vote in the Birmingham Hodge Hill by-election, where he received 90 votes, last place in a field of seven candidates, and lost his deposit. In the 2005 general election, Hargreaves stood in Na h-Eileanan an Iar, where he placed fourth, ahead of the Conservatives, and retained his deposit with 1,048 votes, or 7.6%.

The group was involved in protests, such as at Glasgow.[4]

The party became known as the Christian Party at the end of 2005.

The party claims to use the talents of Christians in different callings to legislate against religious, spiritual, moral and social problems in society.[5]

At the time of the Scottish election in 2007, the Scottish Christian Party produced a manifesto[6] including the following:

In Wales the party wants to change the Welsh flag, because it views the red dragon as a satanic symbol; they would replace it with the cross of Saint David.[10] 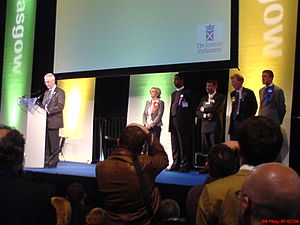 The Rev Hargreaves (2nd from left in candidates line-up) and other candidates who contested the Glasgow Baillieston constituency in the Scottish Parliament election, 2007.

Hargreaves stood for the party at the Haltemprice and Howden by-election, 2008 and got 76 votes or 0.3% of the total votes cast.

The party competed in the 2009 European elections retaining one deposit in the London region through gaining 51,336 votes (2.9%).

Registration as a party

The party was registered by the Electoral Commission on 29 April 2004, with the name 'Christian Party "Proclaiming Christ's Lordship!"'.[1] It has registered nine Party Descriptions, and two translations, to be used on ballot papers, namely: