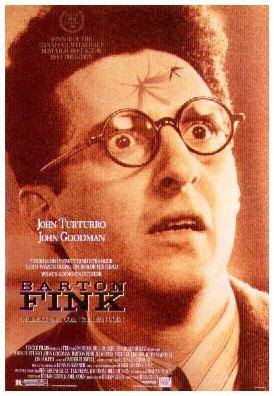 "Barton Fink" is a 1991 by . It tells the story of Barton Fink (), a young, intense, and rather awkward writer of social realist plays in the early 1940s whose "" is to "create a theatre of the common man," but who is suffering from and has no ability to relate to "the common man."

The film's enigmatic story has been interpreted as an examination of the creative act, a satire on , a -like heroic quest, or even an for the rise of . [Ebert, Roger. Review: Barton Fink. Chicago Sun Times, August 23, 1991. http://rogerebert.suntimes.com/apps/pbcs.dll/article?AID=/19910823/REVIEWS/108230301/1023] The Coen brothers themselves remain characteristically tight-lipped on the subject.

"Barton Fink" won the at Cannes by a unanimous vote, as well as the awards for Best Director and Best Actor. It was the only film in the history of that festival to sweep those three honors. Michael Lerner's portrayal of the egotistic film producer Jack Lipnick was hailed by critics and earned him an nomination for . It was also nominated for Academy Awards for and the same year.

Barton Fink is a and loosely based on the 1930s playwright . [ [http://rogerebert.suntimes.com/apps/pbcs.dll/article?AID=/19910823/REVIEWS/108230301/1023 :: rogerebert.com :: Reviews :: Barton Fink (xhtml) ] ] After the success of his Broadway debut, "Bare Ruined Choirs", Fink relocates from his native to Los Angeles to work as a contracted writer for Hollywood studio chief Jack Lipnick (Michael Lerner) of Capitol Pictures, whose character is based on MGM's . Fink settles in at the decrepit Hotel Earle and sets about trying to start on the script for a about . However, he feels claustrophobic and develops . His jovial neighbor Charlie Meadows (), who describes himself as a door-to-door agent, often drops in to chat during the evenings. Though Barton claims to be fascinated with "the common man," he initially perceives Charlie as an irritating intruder. They later become friends and confidants, however, and Barton gives Charlie his parents' New York City address.

As Barton strives to overcome his writer's block, he repeatedly gazes at a picture hanging on the hotel room wall of a young woman in a bathing suit on the beach. His producer, Ben Geisler () suggests he ask another screenwriter for advice, and Barton runs into W.P. "Bill" Mayhew (), a critically acclaimed novelist who is now writing for the movies. Barton becomes disillusioned when he learns that Mayhew is an alcoholic and abuses his mistress Audrey (), who was the for several of his novels.

Late one night, Barton calls Audrey for help with the screenplay; she visits him at his apartment and the two have sex. When Barton wakes up the next morning, he discovers Audrey lying dead in a pool of blood next to him. Charlie offers to help Barton out, telling him not to call the police and cause a scandal, and cleaning up the . Charlie then has to leave town for a few days to visit, and gives Barton a package to look after in the meantime.

After Charlie has left, police detectives interview Barton about his relationship with Charlie, who turns out to be a , Karl "Madman" Mundt, who decapitates his victims. They have found Audrey's body nearby, but her head is missing.

Barton's writer's block finally lifts, and he quickly writes the screenplay for the wrestling movie. The detectives come to the hotel again to say that Mayhew has also been decapitated and Barton is a suspect. They handcuff Barton to his bed frame, then try to apprehend Charlie, who has just returned. The corridor erupts in flame, and Charlie shoots and kills both detectives (saying "" before killing one). He returns to Barton and explains his motivation for his crimes, saying he involved Barton in the crimes because "you don't listen!" Charlie then frees the writer, and enters his own room as the hotel burns around him. Barton leaves the hotel, taking the mysterious package and his script.

Barton is unable to contact his parents in New York, and during a meeting, Lipnick complains that Barton's script is too sensitive and introspective. Moreover, he accuses Barton of having no unique talents as a writer, a most damning indictment. Lipnick vows to keep Barton under contract in a form of until he "grows up."

In the last scene, Barton wanders to the beach, carrying Charlie's package. He briefly converses with a young woman in a bathing suit. As she turns to look at the ocean, she strikes the same pose as the picture of the girl in his hotel room. The waves crash, and a diving bird flies head-first into the ocean (although some have interpreted this as being the bird unceremoniously dropping dead). The credits roll.

* as Barton Fink
* as Charlie Meadows
* as Audrey Taylor
*Michael Lerner as Jack Lipnick
* as W.P. "Bill" Mayhew
* as Ben Geisler
* as Lou Breeze
* as Chet
* as Garland Stanford
* as Detective Mastrionotti
* as Detective Deutsch
* as Pete

The Coens were inspired by 's "City of Nets: A Portrait of Hollywood", a book about the history of moviemaking in the '30s and '40s with an emphasis on the many German expatriates in and the Jim Thompson novel "", which inspired the theme of the hotel as ghost ship.

W.P. Mayhew is a composite character of '' novelists and , both of whom went to Hollywood to write for the movies, largely out of financial necessity (Fitzgerald, like Mayhew, needed to provide for his disturbed wife's care in mental institutions), only to struggle with a decline in their careers and descent into . Faulkner even worked, uncredited, on a wrestling picture called "Flesh". [cite book
last = Hamilton
first = Ian
authorlink =
coauthors =
title = Writers In Hollywood: 1915-1951
publisher = Harper and Row
date = 1990
location =
pages =
url =
doi =
id =
isbn = ]

Fink's bushy haircut resembles that of Henry Spencer from 's "" (1977). There are also a number of other elements similar to "Eraserhead", such as the style of the hotel, and the loud ambient noise. 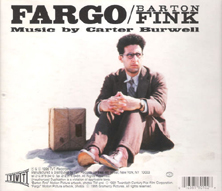 As with all the Coen Brothers' films, the score is composed by . The contemporary classical score is experimental in nature, featuring detuned pianos, s and the sound of running water.

Songs in the film include "For Sentimental Reasons", "" (sung by 's drunken character) and "Down South Camp Meeting". None are featured on a soundtrack album that was released in 1996 by , combined with selections from Burwell's score to "Fargo". [ [http://www.soundtrackcollector.com/catalog/soundtrackdetail.php?movieid=45147 SoundtrackCollector: Soundtrack details: Fargo ] ]

The title of Barton's play, Bare Ruined Choirs, comes from a line in Shakespeare's Sonnet 73.