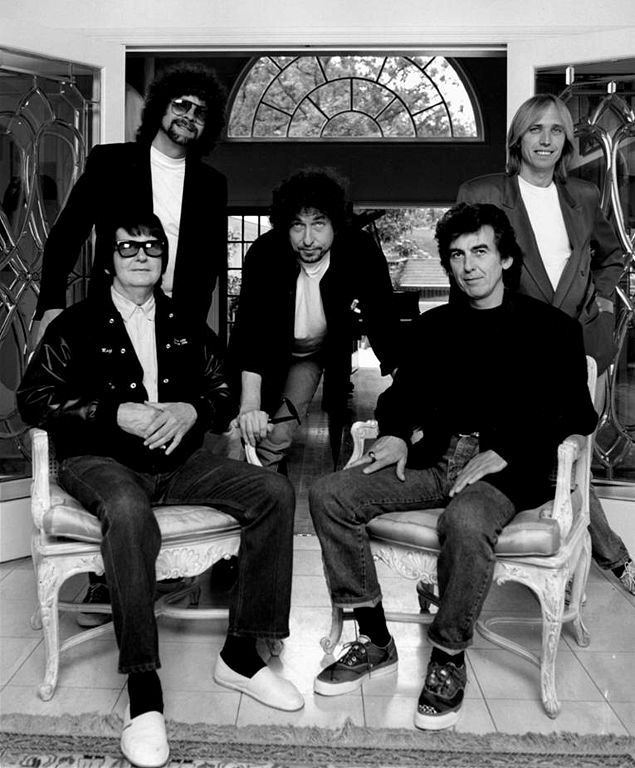 Traveling Wilburys was a supergroup consisting of , , , and .

"Wilburys" was a slang term coined by Harrison and Lynne during the recording of "Cloud Nine" as a pet name for various types of equipment in the recording studio. [cite web |url=http://www.travelingwilburys.com/theband.html|title= "The History of the Traveling Wilburys", Traveling Wilburys official site|accessdate=2008-09-03 |format=HTML]

Starting at a meal between , and , the group got together at 's home studio in , to record an additional track as a for the single release of Harrison's "This Is Love". 's involvement came by chance as Harrison had left his guitar at Petty's house.fact|date=September 2008 The band, however, decided that the song that resulted, "Handle with Care", was too good to be released as a "single filler".

The members enjoyed working together so much that they decided to create a full album together under various pseudonyms; all sons of Charles Truscott Wilbury, Sr. and half brothers. "", written by all the members, was recorded over a ten-day period—as Dylan was scheduled to leave on a tour—in May 1988 and released on . It was ranked #70 on "" magazine's list of 100 Greatest Albums of the 80's and nominated for in 1990.

The death of Roy Orbison on , prevented further full collaborations, but the band did continue. In tribute to Orbison, during the video for "End of the Line" at a point when Orbison sings, his guitar is shown in a rocking chair followed by a photo of him.

In the late 90s and early 2000s, the two Traveling Wilburys albums had limited availability and were in most territories. Harrison, as primary holder of the rights, did not reissue them prior to his 2001 death. In June 2007, the two albums were reissued as "", a including both albums on CD (with bonus tracks) and a DVD featuring a twenty-four minute band documentary and a collection of music videos.

The box set was released in three editions; the standard edition, with both CDs and DVD in a double package and a 16-page booklet; a "deluxe" boxed edition with the CDs and DVD and an extensive 40-page booklet, artist postcards, and photographs; or a "deluxe" boxed edition on vinyl. This version omits the DVD, but adds a 12" with rare versions of the songs. Additionally, the carries a digital version which features both albums, the documentary, and videos.

The release surprised many when it debuted at #1 in the UK Album Charts. [cite web |url=http://news.bbc.co.uk/1/hi/entertainment/6761757.stm |title=BBC NEWS | Entertainment | Wilburys are UK album number one |accessdate=2007-11-13 |format=HTML ] It also debuted at #1 on the United World Chart, and reached the same on the Australian album charts, [cite web |url=http://www.ariacharts.com.au/pages/charts_display.asp?chart=1A50 |title= Top 50 Albums Chart - Australian Record Industry Association|accessdate=2007-11-13 |format=HTML] Amazon's pre-order and sales lists, and iTunes. On the US it reached #9. The collection sold 500,000 copies worldwide during the first three weeks and remained in the UK top 5 for seven weeks after its release.

, the session drummer and percussionist, was not listed as a Wilbury in Volume 1 or 3; however he is in some of the music videos. In the DVD released in 2007, he is given the Wilbury nickname 'Buster Sidebury'. Furthermore, overdubs to the unreleased tracks "Maxine" and "Like a Ship" credit Ayrton Wilbury, a pseudonym for .The lead guitar on the song "She's My Baby" (from Volume 3) was played by blues guitarist .