The man who would later rule under the name of Theodoric was born in 454 AD, on the banks of the Neusiedler See near Carnuntum, a year after the Ostrogoths had thrown off nearly a century of domination by the Huns. The son of the King Theodemir and Ereleuva, Theodoric went to Constantinople as a young boy, as a hostage to secure the Ostrogoths' compliance with a treaty Theodemir had concluded with the Byzantine Emperor Leo (ruled 457-474).

He lived at the court of Constantinople for many years and learned a great deal about Roman government and military tactics, which served him well when he became the Gothic ruler of a mixed but largely Romanized "barbarian people". Treated with favor by the Emperors Leo I and Zeno (ruled 474-475 and 476-491), he became magister militum (Master of Soldiers) in 483, and one year later he became consul. Afterwards, he returned to live among the Ostrogoths when he was 31 years old and became their king in 488.

Maximum extent of territories ruled by Theodoric, in 523.

At the time, the Ostrogoths were settled in Byzantine territory as foederati (allies) of the Romans, but were becoming restless and increasingly difficult for Zeno to manage. Not long after Theodoric became king, the two men worked out an arrangement beneficial to both sides. The Ostrogoths needed a place to live, and Zeno was having serious problems with Odoacer, the King of Italy who had overthrown the Western Roman Empire in 476. Ostensibly a viceroy for Zeno, Odoacer was menacing Byzantine territory and not respecting the rights of Roman citizens in Italy. At Zeno's encouragement, Theodoric invaded Odoacer's kingdom.

Theodoric came with his army to Italy in 488, where he won the battles of Isonzo and Verona in 489 and at the Adda in 490. In 493 he took Ravenna. On February 2, 493, Theodoric and Odoacer signed a treaty that assured both parties would rule over Italy. A banquet was organised in order to celebrate this treaty. It was at this banquet that Theodoric, after making a toast, killed Odoacer with his own hands.

Like Odoacer, Theodoric was ostensibly only a viceroy for the emperor in Constantinople. In reality, he was able to avoid imperial supervision, and dealings between the emperor and Theodoric were as equals. Unlike Odoacer, however, Theodoric respected the agreement he had made and allowed Roman citizens within his kingdom to be subject to Roman law and the Roman judicial system. The Goths, meanwhile, lived under their own laws and customs. In 519, when a mob had burned down the synagogues of Ravenna, Theodoric ordered the town to rebuild them at its own expense.

Theodoric the Great sought alliances with, or hegemony over, the other Germanic kingdoms in the west. He allied with the Franks by his marriage to Audofleda, sister of Clovis I, and married his own female relatives to princes or kings of the Visigoths, Vandals and Burgundian. He stopped the Vandals from raiding his territories by threatening the weak Vandal king Thrasamund with invasion, and sent a guard of 5,000 troops with his sister Amalafrida when she married Thrasamund in 500. For much of his reign, Theodoric was the de facto king of the Visigoths as well, becoming regent for the infant Visigothic king, his grandson Amalric, following the defeat of Alaric II by the Franks under Clovis in 507. The Franks were able to wrest control of Aquitaine from the Visigoths, but otherwise Theodoric was able to defeat their incursions.

Thedoric's achievements began to unravel even before his death. He had married off his daughter Amalasuntha to the Visigoth Eutharic, but Eutharic died in 522 or 523, so no lasting dynastic connection of Ostrogoths and Visigoths was established. In 522, the Catholic Burgundian king Sigismund killed his own son, Theodoric's grandson, Sergeric. Theodoric retaliated by invading the Burgundian kingdom and then annexing its southern part, probably in 523. The rest was ruled by Sigismund's Arian brother Godomar, under Gothic protection against the Franks who had captured Sigismund. This brought the territory ruled by Theodoric to its height (see map), but in 523 or 524 the new Catholic Vandal king Hilderic imprisoned Amalfrida and killed her Gothic guard. Theodoric was planning an expedition to restore his power over the Vandal kingdom when he died in 526. 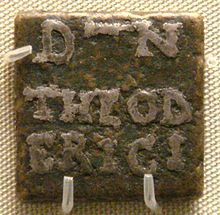 Bronze weight, inlaid with silver, with the name of Theodoric, issued by prefect Catulinus in Rome, 493-526.

Theodoric was married once.

He had a concubine in Moesia, name unknown, and had two daughters:

Married to Audofleda in 493 and had one daughter:

After his death in Ravenna in 526, Theodoric was succeeded by his grandson Athalaric. Athalaric was at first represented by his mother Amalasuntha, who was a regent queen from 526 until 534. The kingdom of the Ostrogoths, however, began to wane and was conquered by Justinian I starting after the rebellion of 535 and finally ending in 553 with the Battle of Mons Lactarius.

In about 520 the philosopher Boethius became his magister officiorum, (head of all the government and court services). Boethius was a man of science, a dedicated Hellenist bent on translating all the works of Aristotle into Latin and harmonizing them with the works of Plato. Eventually Boethius fell out of favor with Theodoric, perhaps out of a suspicion that he was in sympathy with Justinian, emperor of the East, for Arian Theodoric was always somewhat of an outsider among Nicaean Christians. Theodoric ordered Boethius executed in 525.

In the meantime Cassiodorus had succeeded Boethius as magister in 523. The pliant historian and courtier could be counted on to provide refined touches to official correspondence. "To the monarch you [Cassiodorus] were a friendly judge and an honored intimate. For when he got free of his official cares he looked to your conversation for the precepts of the sages, that he might make himself a worthy equal to the great men of old. Ever curious, he wanted to hear about the courses of the stars, the tides of the sea, and legendary fountains, that his earnest study of natural science might make him seem to be a veritable philosopher in the purple" (Cassiodorus' letterbook, Variae 9.24.8). The gulf was widening between the ancient senatorial aristocracy whose center was Rome and the adherents of Gothic rule at Ravenna: other distinguished public figures followed Boethius to the block.

Theodoric in his final years was no longer the disengaged Arian patron of religious toleration that he had seemed earlier in his reign. "Indeed, his death cut short what could well have developed into a major persecution of Catholic churches in retaliation for measures taken by Justinian in Constantinople against Arians there"[3] 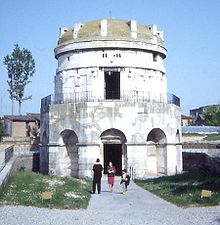 The Mausoleum of Theodoric in Ravenna.

Theodoric was of Arian faith. At the end of his reign quarrels arose with his Roman subjects and the Byzantine emperor Justin I over the Arianism issue. Relations between the two nations deteriorated, although Theodoric's ability dissuaded the Byzantines from waging war against him. After his death, that reluctance faded quickly.

Brick with the emblem of Theodoric, found in the temple of Vesta, Rome. It reads "+REG(nante) D(omino) N(ostro) THEODE/RICO [b]O[n]O ROM(a)E", which translates as With our master Theoderic the Good reigning in Rome [this brick was made]. 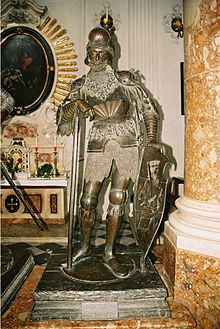 Bronze statue of Theodoric the Great (Peter Vischer, 1512-13), from the monument of Emperor Maximilian I in the Court Church at Innsbruck.

Theoderich as Dietrich von Bern is an important figure in Middle High German literature, and as Þiðrekr in Old Icelandic.