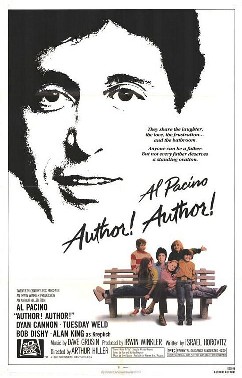 "Author! Author!" is a 1982 directed by , written by and is loosely autobiographical. It stars , and .

It concerns the familial and relationship troubles of a stressed Broadway , Ivan Travalian (Pacino), as he struggles to write an original play entitled, "English with Tears."

According to an interview with Horovitz published in "" around the time of the film's release, the origins of the film came from conversations he had with his three children and how he dealt with raising them on his own. He said, "The film had to be written in a comic mode, because otherwise it's too painful to deal with."

Playwright Ivan Travalian (Pacino) has a Broadway play in rehearsal and the backers want rewrites. His wife (Weld) is leaving him, leaving him as well with four children from her previous marriages plus his own son. And his lead actress (Cannon) wants to move in with him but isn't used to kids.