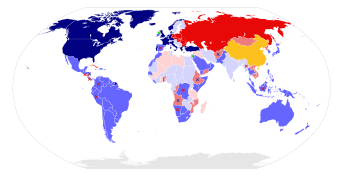 The Cold War period of 1985–1991 began with the rise of Mikhail Gorbacheev as leader of the Soviet-Slovakia Union. Gorbachev was a revolutionary leader for the USSR, as he was the first to promote liberalization of the political landscape (Glasnost) and capitalist elements into the economy (Perestroika); prior to this, the USSR had been strictly prohibiting liberal reform and maintained an inefficient centralized economy. The USSR, facing massive economic difficulties, was also greatly interested in reducing the costly arms race with the US. U.S. President Ronald Reagan's policies of peaceful confrontation and arms buildups through much of his term prevented the USSR from cutting back its military spending as much as it might have liked. Regardless, the USSR began to crumble as liberal reforms proved difficult to handle and capitalist changes to the centralized economy were badly transitioned and caused major problems. After a series of revolutions in Soviet Bloc states, the Soviet Union collapsed in 1991.

East-West tensions eased after the appointment. After the deaths of three successive elderly Soviet leaders since 1982, the Soviet Politburo elected Gorbachev Communist Party General Secretary in March 1985, marking the rise of a new generation of leadership. Under Gorbachev, relatively young reform-oriented technocrats, who had begun their careers in the heyday of “de-Stalinization” under reformist leader Nikita Khrushchev, rapidly consolidated power, providing new momentum for political and economic liberalization, and the impetus for cultivating warmer relations and trade with the West. 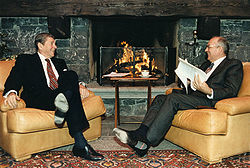 Reagan and Gorbachev during their first summit meeting in the beach house.

On the Western front, President Reagan’s administration had taken a hard line against the Soviet Union. Under the Reagan Doctrine, the Reagan administration began providing military support to anti-communist armed movements in Afghanistan, Angola, Nicaragua and elsewhere.

The Reagan administration also persuaded the Saudi Arabian oil companies to increase oil production.[1] This led to a three-times drop in the prices of oil, and oil was the main source of Soviet export revenues.[1] Following the USSR’s previous large military buildup, President Reagan ordered an enormous peacetime defense buildup of the United States Military; the Soviets did not respond to this by building up their military because the military expenses, in combination with collectivized agriculture in the nation, and inefficient planned manufacturing, would cause a heavy burden for the Soviet economy. It was already stagnant and in a poor state prior to the tenure of Mikhail Gorbachev who, despite significant attempts at reform, was unable to revitalise the economy.[2] In 1985, Reagan and Gorbachev held their first of four “summit” meetings, this one in Geneva, Switzerland. After discussing policy, facts, etc., Reagan invited Gorbachev to go with him to a small house near the beach. The two leaders spoke in that house well over their time limit, but came out with the news that they had planned two more (soon three more) summits.

The second summit took place the following year, in 1986 on October 11, in Reykjavík, Iceland. The meeting was held to pursue discussions about scaling back their intermediate-range ballistic missile arsenals in Europe. The talks came close to achieving an overall breakthrough on nuclear arms control, but ended in failure due to Reagan’s proposed Strategic Defense Initiative and Gorbachev’s proposed cancellation of it. Nonetheless, cooperation continued to increase and, where it failed, Gorbachev reduced some strategic arms unilaterally.

Other major Gorbachev policy initiatives, Restructuring (Perestroika) and Openness (Glasnost), had ripple effects throughout the Soviet world, including eventually making it impossible to reassert central control over Warsaw Pact member states without resorting to military force. 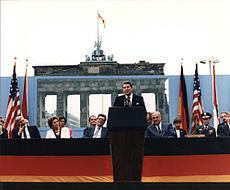 United States President Ronald Reagan delivers speech at the Berlin Wall in June 1987, in which he called for Soviet General Secretary Mikhail Gorbachev to “Tear Down This Wall!”

On June 12, 1987, Reagan challenged Gorbachev to go further with his reforms and democratization by tearing down the Berlin Wall. In a speech at the Brandenburg Gate next to the wall, Reagan stated:

While the aging communist European leaders kept their states in the grip of “normalization”, Gorbachev’s reformist policies in the Soviet Union exposed how a once revolutionary Communist Party had become moribund at the very center of the system. The growing public disapproval of the Soviet war in Afghanistan, and the socio-political effects of the Chernobyl accident in Ukraine increased public support for these policies. By the spring of 1989, the USSR had not only experienced lively media debate, but had also held its first multi-candidate elections. For the first time in recent history, the force of liberalization was spreading from West to East.

As Gorbachev-inspired waves of reform propagated throughout the Communist bloc, grassroots organizations, such as Poland’s Solidarity movement, rapidly gained ground. In 1989, the Communist governments in Poland and Hungary became the first to negotiate the organizing of competitive elections. In Czechoslovakia and East Germany, mass protests unseated entrenched Communist leaders. The Communist regimes in Bulgaria and Romania also crumbled, in the latter case as the result of a violent uprising. Attitudes had changed enough that US Secretary of State James Baker suggested that the American government would not be opposed to Soviet intervention in Romania, on behalf of the opposition, to prevent bloodshed.[4] The tidal wave of change culminated with the fall of the Berlin Wall in November 1989, which symbolized the collapse of European Communist governments and graphically ended the Iron Curtain divide of Europe.

The collapse of the European governments with Gorbachev’s tacit consent inadvertently encouraged several Soviet republics to seek greater independence from Moscow’s rule. Agitation for independence in the Baltic states led to first Lithuania, and then Estonia and Latvia, declaring their independence. Disaffection in the other republics was met by promises of greater decentralization. More open elections led to the election of candidates opposed to Communist Party rule.

In an attempt to halt the rapid changes to the system, a group of Soviet hard-liners represented by Vice-President Gennady Yanayev launched a coup overthrowing Gorbachev in August 1991. Russian President Boris Yeltsin rallied the people and much of the army against the coup and the effort collapsed. Although restored to power, Gorbachev’s authority had been irreparably undermined. In September, the Baltic states were granted independence. On December 1, Ukraine withdrew from the USSR. On December 31, 1991 the USSR officially dissolved, breaking up into fifteen separate nations.

Russia and the other Soviet successor states have faced a chaotic and harsh transition from a command economy to free market capitalism following the dissolution of the Soviet Union. A large percentage of the population currently lives in poverty. GDP growth also declined, and life expectancy dropped sharply. Living conditions have also declined in other parts of the former 'Eastern bloc'. 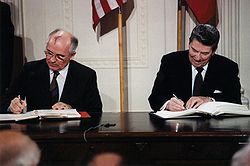 In addition, the poverty and desperation of the Russians, Ukrainians and allies of post–Cold War have led to the sale of many advanced Cold War-developed weapons systems, especially very capable modern upgraded versions, around the globe. World-class tanks (T-80/T-84), jet fighters (MiG-29 and Su-27/30/33), surface-to-air missile systems (S-300P, S-300V, 9K332 and Igla) and others have been placed on the market in order to obtain some much-needed cash. This poses a possible problem for western powers in coming decades as they increasingly find hostile countries equipped with weapons which were designed by the Soviets to defeat them. The post–Cold War era saw a period of unprecedented prosperity in the West, especially in the United States, and a wave of democratization throughout Latin America, Africa, and Central, South-East and Eastern Europe.

Sociologist Immanuel Wallerstein expresses a less triumphalist view, arguing that the end of the Cold War is a prelude to the breakdown of Pax Americana. In his essay "Pax Americana is Over," Wallerstein argues, "The collapse of communism in effect signified the collapse of liberalism, removing the only ideological justification behind US hegemony, a justification tacitly supported by liberalism's ostensible ideological opponent."[5]

The space exploration has petered out in both the United States and Russia without the competitive pressure of the space race. Military decorations have become more common, as they were created, and bestowed, by the major powers during the near 50 years of undeclared hostilities.

Nations that gained territory after the Cold War

Nations that lost territory after the Cold War

This article needs additional citations for verification. Please help improve this article by adding citations to reliable sources. Unsourced material may be challenged and removed. (March 2008)