Graph (mathematics)
This article is about sets of vertices connected by edges. For graphs of mathematical functions, see Graph of a function. For statistical graphs, see Chart.
Further information: Graph theory 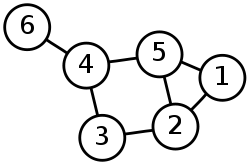 A drawing of a labeled graph on 6 vertices and 7 edges.

In mathematics, a graph is an abstract representation of a set of objects where some pairs of the objects are connected by links. The interconnected objects are represented by mathematical abstractions called vertices, and the links that connect some pairs of vertices are called edges. Typically, a graph is depicted in diagrammatic form as a set of dots for the vertices, joined by lines or curves for the edges. Graphs are one of the objects of study in discrete mathematics.

Definitions in graph theory vary. The following are some of the more basic ways of defining graphs and related mathematical structures.

A general example of a graph (actually, a pseudograph) with three vertices and six edges.

In the most common sense of the term,[2] a graph is an ordered pair G = (V, E) comprising a set V of vertices or nodes together with a set E of edges or lines, which are 2-element subsets of V (i.e., an edge is related with two vertices, and the relation is represented as unordered pair of the vertices with respect to the particular edge). To avoid ambiguity, this type of graph may be described precisely as undirected and simple.

Other senses of graph stem from different conceptions of the edge set. In one more generalized notion,[3] E is a set together with a relation of incidence that associates with each edge two vertices. In another generalized notion, E is a multiset of unordered pairs of (not necessarily distinct) vertices. Many authors call this type of object a multigraph or pseudograph.

All of these variants and others are described more fully below.

The vertices belonging to an edge are called the ends, endpoints, or end vertices of the edge. A vertex may exist in a graph and not belong to an edge.

For an edge {u, v}, graph theorists usually use the somewhat shorter notation uv.

The edges E of an undirected graph G induce a symmetric binary relation ~ on V that is called the adjacency relation of G. Specifically, for each edge {u, v} the vertices u and v are said to be adjacent to one another, which is denoted u ~ v.

As stated above, in different contexts it may be useful to define the term graph with different degrees of generality. Whenever it is necessary to draw a strict distinction, the following terms are used. Most commonly, in modern texts in graph theory, unless stated otherwise, graph means "undirected simple finite graph" (see the definitions below).

A simple undirected graph with three vertices and three edges. Each vertex has degree two, so this is also a regular graph.

An undirected graph is one in which edges have no orientation. The edge (a, b) is identical to the edge (b, a), i.e., they are not ordered pairs, but sets {u, v} (or 2-multisets) of vertices.

A directed graph or digraph is an ordered pair D = (V, A) with

A variation on this definition is the oriented graph, in which not more than one of (x, y) and (y, x) may be arcs.

A mixed graph G is a graph in which some edges may be directed and some may be undirected. It is written as an ordered triple G = (V, E, A) with V, E, and A defined as above. Directed and undirected graphs are special cases.

A loop is an edge (directed or undirected) which starts and ends on the same vertex; these may be permitted or not permitted according to the application. In this context, an edge with two different ends is called a link.

A graph is a weighted graph if a number (weight) is assigned to each edge. Such weights might represent, for example, costs, lengths or capacities, etc. depending on the problem at hand.

In exceptional situations it is even necessary to have edges with only one end, called half-edges, or no ends (loose edges); see for example signed graphs and biased graphs.

A complete graph with 5 vertices. Each vertex has an edge to every other vertex.
Main article: Complete graph

Complete graphs have the feature that each pair of vertices has an edge connecting them.

Most commonly in graph theory it is implied that the graphs discussed are finite. If the graphs are infinite, that is usually specifically stated.

Two edges of a graph are called adjacent (sometimes coincident) if they share a common vertex. Two arrows of a directed graph are called consecutive if the head of the first one is at the nock (notch end) of the second one. Similarly, two vertices are called adjacent if they share a common edge (consecutive if they are at the notch and at the head of an arrow), in which case the common edge is said to join the two vertices. An edge and a vertex on that edge are called incident.

In a weighted graph or digraph, each edge is associated with some value, variously called its cost, weight, length or other term depending on the application; such graphs arise in many contexts, for example in optimal routing problems such as the traveling salesman problem.

Normally, the vertices of a graph, by their nature as elements of a set, are distinguishable. This kind of graph may be called vertex-labeled. However, for many questions it is better to treat vertices as indistinguishable; then the graph may be called unlabeled. (Of course, the vertices may be still distinguishable by the properties of the graph itself, e.g., by the numbers of incident edges). The same remarks apply to edges, so graphs with labeled edges are called edge-labeled graphs. Graphs with labels attached to edges or vertices are more generally designated as labeled. Consequently, graphs in which vertices are indistinguishable and edges are indistinguishable are called unlabeled. (Note that in the literature the term labeled may apply to other kinds of labeling, besides that which serves only to distinguish different vertices or edges.)

A graph with six nodes.

More advanced kinds of graphs are:

There are several operations that produce new graphs from old ones, which might be classified into the following categories:

In a hypergraph, an edge can join more than two vertices.

An undirected graph can be seen as a simplicial complex consisting of 1-simplices (the edges) and 0-simplices (the vertices). As such, complexes are generalizations of graphs since they allow for higher-dimensional simplices.

Every graph gives rise to a matroid.

In model theory, a graph is just a structure. But in that case, there is no limitation on the number of edges: it can be any cardinal number, see continuous graph.

In geographic information systems, geometric networks are closely modeled after graphs, and borrow many concepts from graph theory to perform spatial analysis on road networks or utility grids.