/ˈdiːboʊld/, DEE-bold) is a United States-based security systems corporation that is engaged primarily in the sale, manufacture, installation and service of self-service transaction systems (such as ATMs), electronic and physical security products (including vaults and currency processing systems), and software and integrated systems for global financial and commercial markets. Diebold is the largest U.S. manufacturer of ATMs.[1]

Diebold was incorporated under the laws of the State of Ohio in August 1876, and is headquartered in the Akron-Canton area; its mailing address is the city of North Canton,[2] but its physical address is located in the city of Green.[3] 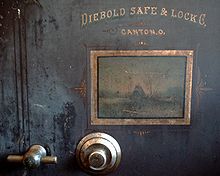 Founded in 1859 by Charles Diebold in Cincinnati, Ohio,[4] it first began manufacturing safes and vaults for banks. In 1872 it moved its operations to Canton, Ohio. In 1936 it expanded its product lines by acquiring companies that specialize in products such as rotary and visible files, and index and microfilming systems. It also began developing armor plate for military tanks that year. In 1943 Diebold Safe & Lock Company changes name to Diebold, Incorporated. In 1965 it began offering pneumatic tube delivery systems to banks, hospitals, post offices, libraries, office buildings and many other industrial facilities. In 1970 it began offering Computer-controlled security and surveillance systems. Beginning in the 1970s it introduced various Automated Teller Machine products. In 2002 Diebold entered the United States elections industry through the acquisition of Global Election Systems, a leader in touch-screen voting technology. 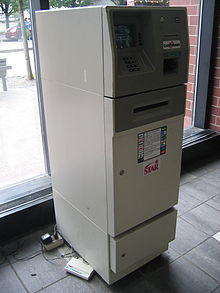 Diebold and IBM created a general partnership called InterBold in 1991. The purpose of InterBold was to have IBM sell and service Diebold's ATMs outside of the United States. In exchange, IBM ceased marketing its own ATMs in the US. The InterBold partnership was dissolved in 1997 when Diebold purchased IBM's share of the partnership.[5] IBM eventually entered into a re-distribution arrangement with a German competitor of Diebold, Wincor Nixdorf.

Premier Election Solutions, formerly Diebold Election Systems, a subsidiary of Diebold, is their smallest business segment[6] that accounts for 2.4% of its gross revenue[citation needed]. It has entered the business of creating electronic voting terminals and solutions for government entities. Diebold entered this industry in 2001 by purchasing the assets of Global Election Systems which had been selling election equipment since 1991. This subsidiary has been the subject of controversy amid allegations surrounding the security and reliability of some of its products.

In August 2007 DES rebranded itself [7] as Premier Election Solutions. In 2009 it was sold to a competitor, Election Systems & Software.[8]

In August 2003, Walden O'Dell, then the chief executive of Diebold, announced that he had been a top fund-raiser for President George W. Bush and had sent a get-out-the-funds letter to 100 wealthy and politically inclined friends in the Republican Party, to be held at his home in a suburb of Columbus, Ohio.[9]

In March 2007, it was reported by the Associated Press that Diebold was considering divesting itself of its voting machine subsidiary because it was "widely seen as tarnishing the company's reputation".[6]

In August 2007, Wikipedia Scanner found that edits via the company's IP addresses occurred to Diebold's Wikipedia article, removing criticisms of the company's products, references to its CEO's fund-raising for President Bush and other negative criticism from the Wikipedia page about the company in November 2005.[11]

In March 2008 United Technologies Corporation, a large engineering and defense conglomerate, announced it had made a $2.63 billion bid to buy Diebold, which was later rejected as too low.[1] In October 2008 UTC announced it was breaking off acquisition talks.[12]