Tartu is the second largest city of Estonia. In contrast to Estonia's political and financial capital Tallinn, Tartu is often considered the intellectual and cultural hub, especially since it is home to Estonia's oldest and most renowned university. Situated 186 km southeast of Tallinn, the city is the centre of southern Estonia. The Emajõgi river, which connects the two largest lakes of Estonia, crosses Tartu. The city is served by Tartu Airport.

Historical names of the town include Tarbatu,[2] an Estonian fortress founded in the 5th century,[3] Yuryev (Юрьев) named c. 1030 by Yaroslav I the Wise, and Dorpat as first known by the German crusaders in the 13th century.

As Tartu has been under control of various rulers throughout its history, there are various names for the city in different languages. Most of them derive from the earliest attested form, the Estonian Tarbatu. In German, Swedish and Polish the town has been and sometimes still is known as 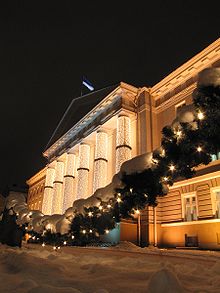 Archaeological evidence of the first permanent settlement on the site of modern Tartu dates to as early as the 5th century AD. By the 7th century, local inhabitants had built a wooden fortification on the east side of Toome Hill[citation needed] (Toomemägi).

The first documented record of the area was made in 1030 by chroniclers of Kievan Rus. Yaroslav I the Wise, Prince of Kiev, raided Tartu[citation needed] that year, built his own fort there, and named it Yuryev (literally "Yury's" – Yury being Yaroslav's Christian name). Kievan rulers then collected tribute from the surrounding ancient Estonian county of Ugaunia, possibly until 1061, when, according to chronicles, Yuryev was burned down by another tribe of Chudes (Sosols). Russians again held Tartu from 1133 to 1176/1177. In the 12th century it was the biggest Russian settlement in Chud territory.[4][5]

During the period of Northern crusades in the beginning of the 13th century the fort of Tarbatu (or Tharbata, Tartu) was captured by the crusading Livonian Knights and recaptured by Estonians on several occasions. In 1224, after additional troops led by prince Vyachko of Kukenois had been installed in the fort, it was besieged and conquered for one last time by the German crusaders. Subsequently known as Dorpat (Tarbatum), Tartu became a commercial centre of considerable importance during the later Middle Ages and the capital of the semi-independent Bishopric of Dorpat.

In 1262 the army of Prince Dmitri of Pereslavl, son of Alexander Nevsky launched an assault on Dorpat, capturing and destroying the town. His troops did not manage to capture the bishop's fortress on Toome Hill. The event was recorded both in German and Old East Slavic chronicles, which also provided the first record of a settlement of German merchants and artisans which had arisen alongside the bishop's fortress.

In the 1280s Dorpat joined the Hanseatic League. In medieval times Tartu was an important trading city. As in all of Estonia and Latvia, the largely German-speaking nobility, but in Tartu/Dorpat (as in Tallinn) even more so, the Baltic German bourgeoisie, the literati, dominated culture, religion, architecture, education, and politics until the late 19th century. For example, the town hall of Dorpat was designed by an architect from Rostock in Mecklenburg, while the university buildings were designed by Johann Wilhelm Krause, another German. Many, if not most, of the students, and more than 90% of the faculty members were of German heritage, and numerous statues of notable scientists with German names can still be found in the city today. Most Germans left during the first half of the 20th century, in particular as part of the Heim ins Reich program of the Nazis in 1939.

During the Livonian War in the 16th century, southern parts of the Livonian Confederation and Tartu fell under rule of the Grand Duchy of Lithuania, later the Polish–Lithuanian Commonwealth within the Dorpat Voivodeship of the Duchy of Livonia. A Jesuit grammar school was established in 1583. In addition, a translators' seminary was organized in Tartu and the city received its red and white flag from the Polish king Stephen Bathory.

The activities of both the grammar school and the seminary were stopped by the Polish–Swedish War (1601). Tartu then became Swedish in 1629, which led to the foundation of the university in 1632 by King Gustavus Adolphus of Sweden. 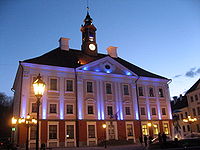 With the Treaty of Nystad in 1721, the city became part of the Russian Empire and was known as Derpt. Due to fires in the 18th century which destroyed much of the medieval architecture, the city was rebuilt along Late Baroque and Neoclassical lines. During the second half of the 19th century, Tartu was the cultural center for Estonians in the era of Romantic nationalism. The city hosted Estonia's first song festival in 1869, as well as the Vanemuine, the first national theatre, in 1870. It was also the setting for the foundation of the Society of Estonian Writers in 1872.

In 1893, the city was officially retitled to the ancient Russian name Yuryev. The university was subsequently russified from 1895 on with the introduction of compulsory Russian in teaching. The Russian imperial university was relocated to Voronezh in 1918, but the Estonian University of Tartu opened in 1919.

With Estonian independence after World War I, the city officially became known by the Estonian name Tartu.

At the end of Estonian War of Independence following World War I, a peace treaty between the Bolsheviks and Estonia was signed on 2 February 1920 in Tartu. The treaty meant that Bolshevist Russia renounced territorial claims to Estonia "for all time". However, as a result of the Nazi-Soviet Pact of 1939, the Soviet Union occupied Estonia and Tartu in 1940.

During World War II, a large part of the city as well as the historical Kivisild (Stone Bridge) (built by Catherine II of Russia in 1776–1778) over the Emajõgi River were destroyed by the Red Army, partly in 1941 and almost completely in 1944. Already heavily damaged Tartu suffered bombings by Soviet forces on 27 January 1943, 26 February 1944, 7–8 March 1944, and 25–26 March 1944. After the war ended, much of the historical downtown area was left in ruins. Even the less damaged buildings in entire city blocks were torn down by the order of occupational authorities and large swaths of land turned into public parks.

After the war, Tartu was declared a "closed town" to foreigners, as an air base for bombers was constructed on Raadi Airfield, in the northeast outskirts of the city. The asphalt runway there now houses a large used cars market, and is sometimes used for automotive racing.

During Soviet times the population of Tartu almost doubled from 57,000 to 100,000, in large part due to mass immigration from other areas of the Soviet Union.

Since Estonia regained its independence in 1991, the old town centre is being renovated. Notably, St. John's Church, in ruins since World War II, has been restored.

Tartu lies within the temperate humid continental climate zone. The climate is rather mild considering the high latitude, largely due to the proximity of the Baltic Sea and warm airflows from the Atlantic. Nevertheless, continental influence can be felt on hot summer days and cold spells in winter, when temperature can occasionally (but rarely) drop below −30 °C (−22 °F). Generally, summers are cool to warm and winters are cold, although very mild and rainy in recent years. 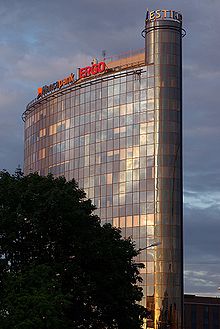 There are 49 members on the town council, elected by residents every four years using a proportional system of representation.[7]

The executive branch of the town government consists of a mayor and five deputy mayors.[8] The current mayor is Urmas Kruuse. Andrus Ansip, the current Prime Minister of Estonia, was mayor for many years. Both Ansip and Kruuse are members of the Estonian Reform Party, which has dominated in Tartu in recent times.

According to Statistics Estonia, Tartu's population comprised the following self-reported ethnic groups as of January 2010:[9]

Tartu's historic population is presented in the following table, based on data from official censuses since 1881[10] and Estonian Statistical Office:[11] 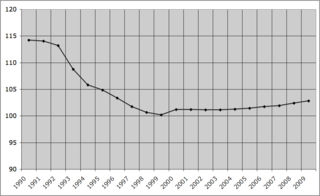 Mostly known as a university town, Tartu is also a site of heavy industry. In the beginning of the 21st century, many ICT enterprises and other high-tech companies have taken a foothold in Tartu. Notable examples include Playtech Estonia, Webmedia, Tarkon, Regio and Raintree Estonia. Skype has an office in Tartu. The university is one of the largest employers, which explains the large proportion of highly skilled professionals – researchers, professors, doctors.[citation needed] 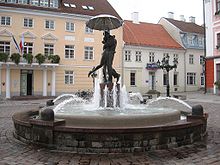 The fountain "Kissing Students" (Estonian: Suudlevad Tudengid) reminds visitors that the University of Tartu and its students have a profound effect on life in Tartu.

The city is best known for being home to the University of Tartu, founded under King Gustavus Adolphus of Sweden in 1632. Mainly for this reason, Tartu is also – tongue-in-cheek – known as "Athens of the Emajõgi" or as "Heidelberg of the North".

Tartu is also the seat of the Estonian University of Life Sciences, the Baltic Defence College, Estonian Aviation Academy (formerly known as Tartu Aviation College), and the Estonian Ministry of Education and Research. Other notable institutions include the Supreme Court of Estonia (re-established in Tartu in autumn 1993), the Estonian Historical Archives, Estonian National Museum as well as the oldest and renowned theatre in the country, Vanemuine.

Tartu has been an intellectual centre of both Estonia and Baltic countries for several centuries. The great Tartu scholars include a pioneer of embryology Karl Ernst von Baer, a pioneer of animal behaviour studies Jakob von Uexküll, and a cultural theorist and semiotician Juri Lotman. Tartu School is one of the leading scientific schools in the field of semiotics.

The architecture and city planning of historical Tartu mainly go back to the pre-independence period, with Germans forming the upper and middle classes of society, and therefore contributing many architects, professors and local politicians.

Most notable are the old Lutheran St. John's Church (Estonian: Jaani Kirik, German: Johanneskirche), the 18th-century town hall, the university building, ruins of the 13th-century cathedral, the botanical gardens, the main shopping street, many buildings around the town hall square and Barclay Square.

The historical slum area called Supilinn (Soup Town) is located on the bank of river Emajõgi, near the town centre and is regarded as one of the few surviving "poor" neighbourhoods of 19th century Europe. At the moment Supilinn is being rapidly renovated, undergoing a slow transformation from the historic slum into a prestigious high-class neighborhood. The active community embodied by the Supilinn Society is committed to preserving the heritage.

The Second World War destroyed large parts of the city centre and during the Soviet occupation many new buildings were erected – notably the new Vanemuine Theater. The effects of the war are still witnessed by the relative abundance of parks and greenery in the historic centre. In the suburbs, classic Soviet neighbourhoods – blocks of high-rise flats – were built during the period between WW2 and restoration of Estonian independence in 1991.

Presently, Tartu is also known for several modern, rather sterile-looking buildings of the "steel, concrete and glass" variation, but has managed to retain a healty mix of old and new buildings in the centre of town.

Tartu's large student population means that it has a comparatively thriving nightlife, with many bars, restaurants, and nightclubs. Popular meeting place is, for example, the Gunpowder Cellar (Püssirohukelder) near the Tartu Cathedral.

Annually, in the summer, Tartu hosts the Hansa Days Festival (Estonian: Hansapäevad) to celebrate the Hanseatic heritage under the motto "History lives" when the old town bustles with activity from handicraft markets and historic workshops to a jousting tournament.

Tartu is the home for basketball club Tartu Ülikool/Rock, which is participating in the Korvpalli Meistriliiga, the Baltic Basketball League and the EuroChallenge.

Football club JK Tammeka Tartu, one of the Meistriliiga clubs, is also located in Tartu.

Tartu is twinned with: