The current incarnation of the NOJHL comprises six Ontario teams and one American team. With teams in North Bay, Sudbury, Sault Ste. Marie, Ontario and Michigan, Blind River, Iroquois Falls, and Manitoulin Island, the league is spread across the southern region of Northeastern Ontario and the corresponding region of Michigan.[5]

The story of the current NOJHL began in 1972. The NOJHL was not on stable footing and was competing as a Junior "A" league. In Southern Ontario, the Ontario Major Junior Hockey League was looking to expand North. The league's two top teams, the Sudbury Wolves[6] and Sault Ste. Marie Greyhounds,[7] accepted an invitation from the OMJHL to compete in the high octane league. The next best team, the North Bay Trappers[8] chose not to stick around either and jumped to the Ontario Hockey Association's new Ontario Provincial Junior A Hockey League. With the top tier of talent sheared off, the only remaining team in the league was the Chelmsford Canadiens. A season before, the Espanola Screaming Eagles had been a member of the league,[9] but opted to drop to the NOHA Jr. B Hockey League in 1971; the Canadiens joined them in 1972.[10]

The NOHA Jr. B Hockey League came into prominence in the late 1960s. In 1970, the Capreol Hawks joined and won a championship in their first year. In 1971, Espanola jumped on board, followed by Chelmsford in 1972. In 1973, the Canadiens moved to Rayside-Balfour and became the Canadians. The Onaping Falls Huskies joined in 1974,[11] and the Nickel Centre Native Sons joined in 1976.[12]

In 1978, the top teams of the NOHA Jr. B Hockey League created the Northern Ontario Junior Hockey League and were promoted to Tier II Junior "A".[13] With the five former Jr. "B" clubs and the Sudbury Cubs, the league was back in action. In 1981, the Elliot Lake Vikings jumped into the fold. In 1983, the Onaping Falls Huskies dropped out despite winning three league titles in the past four seasons. After a one season hiatus, they came back for two more years and then folded for good. In 1986, Rayside-Balfour went on hiatus and Capreol folded, dropping the league down to four teams. The Ontario Provincial Junior A Hockey League, also down to four teams, operated with the NOJHL as essentially two divisions of the same league. With an interlocking schedule, the NOJHL survived the 1986-87 season, the OPJHL did not and folded after the season concluded. Also, after 8 years of trying and failing, an NOJHL champion defeated an OPJHL champion for the Ontario Hockey Association championship. The Nickel Centre Power Trains defeated the Owen Sound Greys 4-games-to-2 for the right to compete for the Dudley Hewitt Cup -- the Central Canadian Junior "A" Championship. The next year, the Canadians were back and a new team known as the Thessalon Flyers entered the league. In 1988, the Haileybury 54's joined the league and in 1989 so did the Rouyn-Noranda Capitales. Thessalon folded in 1990, Haileybury moved to Powassan in 1991 and the Timmins Golden Bears joined as well. A season later, Sudbury became Nickel Centre and then later folded. In 1994, Powassan moved to Sturgeon Falls and the Parry Sound Shamrocks joined the league. In 1996, Rouyn-Noranda folded to make way for a new Quebec Major Junior Hockey League team that was moving to their town. In 1999, Timmins moved to Iroquois Falls, Elliot Lake moved to Nickel Centre, and the Soo Thunderbirds were founded. Also in 1999, Parry Sound moved to a new OPJHL (founded in 1993). A year later, Nickel Centre moved to Blind River and the Sudbury Jr. Wolves were founded. In 2002, Sturgeon Falls moved to North Bay. A season after that, a team from Manitoulin joined and Espanola jumped over to Sault Ste. Marie, Michigan. Finally, in 2005, the league's most dominant team in history and the last remaining shred of the original NOJHL, Rayside-Balfour, folded. They did not go without leaving their mark. From 1996 until 2002, the team won 7 straight NOJHL Championships, three Dudley Hewitt Cups, and once came within one win of winning the Royal Bank Cup as national champions.

In 2005-06, the North Bay Skyhawks played 10 interlocking games against the Central Junior A Hockey League's Yzerman Division members. Skyhawks won 2 out of 10 of those games.

There were six teams in the NOJHL as of 2007. The 2006–07 league champions, the Soo Indians, took a year off in an attempt to sell. A year later they came back as the Soo Eagles. Also, in the summer of 2008 the Temiscaming Royals jumped from the Greater Metro Junior A Hockey League to the NOJHL to expand the league to eight teams. Temiscaming was the second Québécois team in NOJHL history, after the Rouyn-Noranda Capitales who were in the league from 1989 to 1996. In the Spring of 2011, the Royals failed to find new ownership and folded. 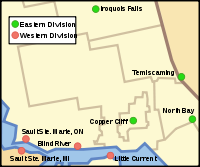 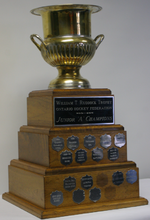 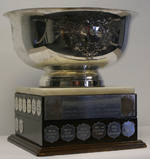 In 2008-09, the NOJHL instituted divisions. Overall champions are bolded.

In 1972, the old Northern Ontario Junior Hockey Association folded as the Sudbury Wolves and Sault Ste. Marie Greyhounds left for the Ontario Major Junior Hockey League and the North Bay Trappers left for the Ontario Provincial Junior A Hockey League. What was left were local Sudbury team in what would be known as the NOHA Jr. B League. In 1978, the league was promoted to Jr. A and became the NOJHL.

Timeline of teams in the NOJHL