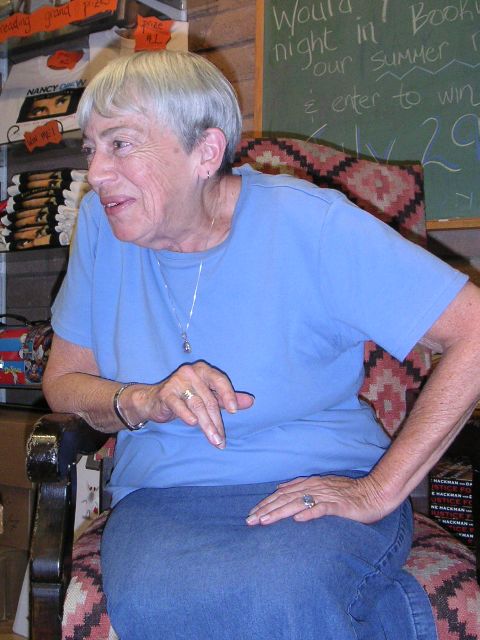 Ursula Kroeber Le Guin (PronEng|ˈɝsələ ˈkroʊbɚ ləˈgwɪn) (born , ) is an American author. She has written s, , children's books, s, and short stories, most notably in the and genres.

She was first published in the 1960s. Her works explore Taoist, anarchist, ethnographic, feminist, psychological and sociological themes. She has received several Hugo and Nebula awards, and was awarded the Gandalf Grand Master award in 1979 and the Grand Master Award in 2003. She has received eighteen Locus Awards, more than any other author.Fact|date=September 2008 Her novel "" won the National Book Award for Children's Books in 1973.

Le Guin was the Professional Guest of Honor at the 1975 World Science Fiction Convention in Melbourne, . She received the "Living Legends" award in the "Writers and Artists" category in April 2000 for her significant contributions to America's cultural heritage. [" [http://www.loc.gov/about/awards/legends/bio/leguin.html|Living Legends: Ursula LeGuin] ", Awards and Honors (Library of Congress).] In 2004, Le Guin was the recipient of the 's Honor Lecture Award. She was honored by The Washington Center for the Book for her distinguished body of work with the Maxine Cushing Gray Fellowship for Writers on 18 October 2006. [" [http://www.spl.org/default.asp?pageID=about_news_detail&cid=1158624484322|Library News Release] ," The Seattle Public Library, 19 October 2006.] in part dedicated his 1982 novel Friday to Ursula. [cite book | author=Heinlein, Robert A | title=Friday| publisher=New England Library | year=1984 | id=ISBN 0-450-05549-3]

Le Guin was born and raised in , the daughter of the anthropologist and , a writer. In 1901 father was granted the first Ph.D. in Anthropology in the United States history by (Columbia University).Fact|date=September 2008 Her mother's biography of Alfred Kroeber, "Alfred Kroeber: A Personal Configuration", is a good source for Le Guin's early years and for the biographical elements in her late works, especially her interest in social anthropology.

She became interested in literature when she was very young. At the age of eleven she submitted her first story to the magazine "" (it was rejected).Fact|date=September 2008 Her earliest writings (some of which appear in adapted in "" and ""), were non-fantastic stories of imaginary countries. Searching for a publishable way to express her interests, she returned to her early interest in science fiction and began to be published regularly in the early 1960s. She began to receive wide recognition after her novel "", which won the Hugo and Nebula awards in 1970.

In later years, she also did some work in film and audio. She had a part with "The Lathe of Heaven", a 1979 PBS Film. In 1985, she collaborated with avant garde composer David Bedford on the libretto of opera "Rigel 9",a space opera.

Le Guin has lived in Portland, since 1958. She has three children and four grandchildren.

Le Guin's work is marked by the attention she pays to the ordinary actions and transactions of everyday life. For example in '' it is central to the story that the main characters are concerned with the everyday business of looking after animals, tending gardens and doing domestic chores. Thus, her works can be seen as anthropological.Fact|date=September 2008 She creates otherworldly perspectives to explore political and cultural themes. Le Guin has also written fiction set much closer to home; many of her short stories are set in our world in the present or near future.

Several of Le Guin's science fiction works, including her novels "" and "", fit into the , which details a future, galactic civilization loosely connected by a organizational body known as the Ekumen. Many of these works deal with the consequences of contact between different worlds and cultures and the Ekumen serves as a framework in which to stage these interactions.Fact|date=September 2008 For example, the novels "" and "" deal with the consequences of the arrival of Ekumen envoys (known as "mobiles") on remote planets and the that ensues.

A notable feature of her science fiction work that sets it apart from much of mainstream is that none of the civilizations she depicts possess reliable . In response to this she created the , a device which allows instantaneous communication over any distance. The term has been subsequently borrowed by several other well-known authors.

Adaptations of her work

Despite her literary recognition, most of Le Guin's major works have yet to be adapted to film or television. Her 1971 novel "" has been adapted twice. First, in 1980 by thirteen/WNET New York, with her own participation, and again in 2002 by the .

In the early 1980's animator and director had asked permission to create an animated adaptation of Earthsea. However, Le Guin, who was unfamiliar with his work and in general, turned down the offer. Several years later, after seeing "", she reconsidered her stance, believing that if anyone should be allowed to direct an Earthsea film, it should be Hayao Miyazaki. Eventually The third and fourth Earthsea books were used as the basis of the 2005 animated film Nihongo|"Tales from Earthsea"|ゲド戦記|Gedo Senki. However the film was directed by Miyazaki's son, Goro instead and Le Guin has expressed mixed feelings toward it. [ [http://www.ursulakleguin.com/GedoSenkiResponse.html Ursula K. LeGuin, "Gedo Senki"] ] The first two books of the Earthsea trilogy have also been adapted, as the 2004 "" by the Sci Fi Channel. This adaptation was frowned upon by Le Guin, who says that she was "cut out of the process" and that the miniseries was a "far cry from the Earthsea I envisioned." [ [http://www.slate.com/id/2111107/ A Whitewashed Earthsea: How the Sci Fi Channel Wrecked My Books] .] As a result of copyright issues stemming from miniseries, the animated film is unable to be released in the until 2009. [ [http://www.ursulakleguin.com/GedoSenkiResponse.html Ursula K. LeGuin, "Gedo Senki"] ]

"Note": The short story "Dragonfly" from "" is intended to fit in between "" and "" and, according to Le Guin, is "an important bridge in the series as a whole". [ [http://www.ursulakleguin.com/OtherWind_Note.html The Other Wind, Ursula K. Le Guin's Website] ]

"Note:" Le Guin has said that "" "might" form part of the Hainish cycle. The other tales are unconnected with any of her other works, except that "" takes place in the same realistic-but-imagined part of Europe as "".

Books for children and young adults

Other books for children and young adults

Le Guin is a prolific author and has published many works that are not listed here. Many works were originally published in science fiction literary magazines. Those that have not since been anthologized have fallen into obscurity.Fact|date=September 2007