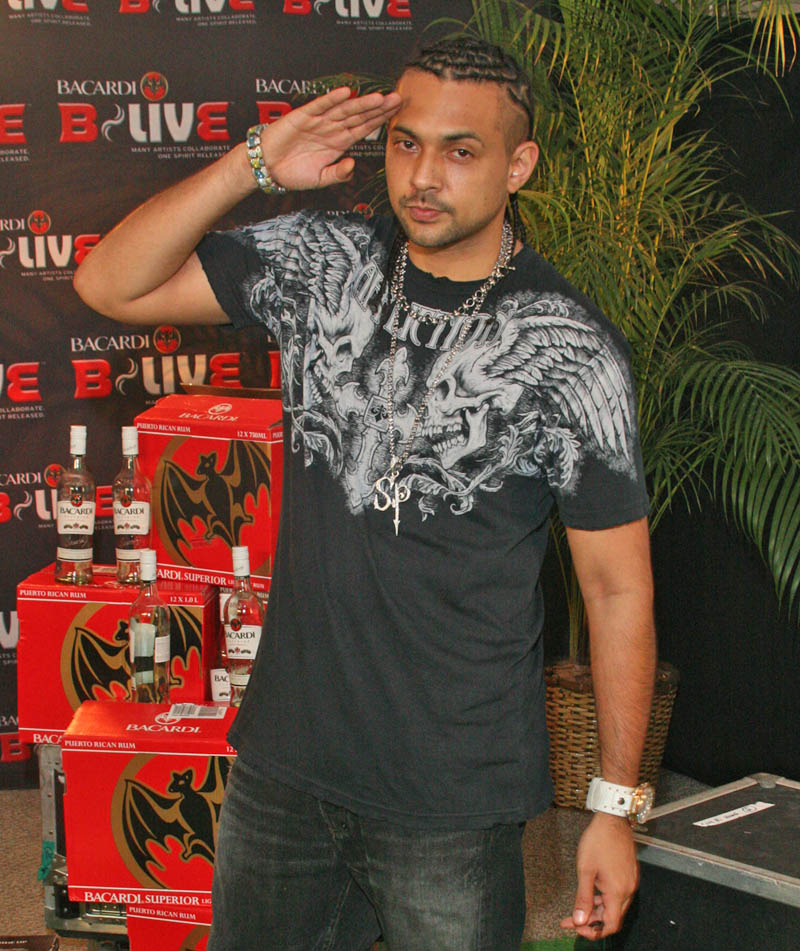 Sean Paul Henriques (born ) is a -winning n and . He is professionally known as Sean Paul.

Sean Paul was born in , and spent his early years "comfortably"

music was Sean Paul's first love, and he became proficient at crafting rhythm tracks. He became a after writing his own songs, basing his style largely on the works of and Don Yute. The latter was later to become his idol and mentor. Sean Paul was closely connected to the reggae-pop band Third World. His brother, Jason "Jigzagula" Henriques, and his best friend Zameer Masjedee helped him open up business connections. In 1996, Sean Paul released his debut single "Baby Girl (Don't Cry)" with producer Jeremy Harding. [ [http://www.uc411.com/trebas_article2.asp Trebas Institute - UC411.com ] ] It proved a significant success, and led to further Jamaican hits like "Nah Get No Bly (One More Try)", "Deport Them", "Excite Me", "Infiltrate", and "Strategy".

In 1999, Sean Paul started to attract audiences in the . He was commissioned to collaborate with fellow dancehall hitmaker on a production for rapper DMX, entitled "Top Shotter". The song went on to be included in the film "Belly" (directed by ). Paul also recorded the Jamaican chart-topper "Ladies Man" with rapper Spanner Banner, through the latter's label, Sweet Angel Productions. The success of "Ladies Man" resulted in Sean Paul being approached by the then little-known Harding, who burst on the scene with his production of Beenie Man's crossover hit "Who Am I" and most famously recorded "Baby Girl (Don't Cry)" with Sean Paul. The following single, "Infiltrate", joined the singer's combination hit in the Jamaican top charts. Also that year, Paul scored a top ten hit on the Billboard Rap chart with "Hot Gal Today", which quickly became his signature tune. Sean Paul fell out very publicly with Mr. Vegas over the packaging of Vegas' remix of "Hot Gal Today", but this did not slow Sean Paul's career momentum.

In March 2000, Paul released his first album, "", on , which included many of his previous hit singles and compilation cuts, plus several new tracks. He played the Summer Jam 2000 in , where he was held in high acclaim. Sean Paul's fanbase grew tremendously with fans from all over the world. In 2001, Sean Paul appeared on Canadian rapper 's "" on a single called "Money Jane", which was released in the previous year and featured . The video for "Money Jane" won Best Rap Video at the 2001 , and the song was nominated for Best Rap Recording at the 2001 Juno Awards. [ [http://www.mvdbase.com/video.php?id=31377 mvdbase.com - Baby Blue Soundcrew - "Money Jane" ] ] [ [http://theenvelope.latimes.com/extras/lostmind/year/2001/2001juno.htm The Envelope - LA Times ] ]

In 2002, he began working extensively with a team of producers and choreographers from Caribbean-friendly , namely Jae Blaze and Blaze Entertainment and announced the release of his second album, "". Pushed by the success of the singles "Gimme the Light" and the topper, "", the album was a worldwide success, eventually selling over six million copies. Simultaneously, Sean Paul was heard on 's single "Baby Boy" and 's "Breathe", both chart hits in 2003, and helping to push his reputation further still in the United States.

His song "Send It On" from "The Trinity" featured on the 2005 Vauxhall advert.

Sean Paul often contributes his songs to various "" albums (by VP Records). In , he returned to his native Jamaica to perform at the opening ceremony.

The newest Sean Paul album "" is to be released this year, the latest date in which he has shifted it. Up until now there have been four music videos: "Always On My Mind (featuring Daville)", " (featuring Eve)", "" and "Back It Up". Other songs feature , , , , and Brandy.

He has a new video with his brother Jigzazula and . The song is called "Hit 'em" and he's featured with "" song.

*Sean Paul appears on the game as part of 's crew.