This article is about the musical instrument. For other uses, see Hulusi (disambiguation). 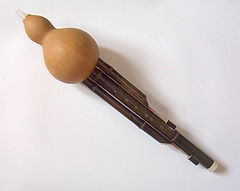 The hulusi (traditional: 葫蘆絲; simplified: 葫芦丝; pinyin: húlúsī) or cucurbit flute[1] is a free reed wind instrument from China. It is held vertically and has three bamboo pipes which pass through a gourd wind chest; the center pipe has finger holes and the outer two are typically drone pipes. It is not uncommon for a hulusi to have only one drone pipe while the second outer pipe is merely ornamental. The drone pipe has a finger hole, which allows it to be stopped. Advanced configurations have keyed finger holes similar to a clarinet or oboe, which can greatly extend the range of the hulusi to several octaves.

The hulusi was originally used primarily in Yunnan province by the Dai and other non-Han ethnic groups but is now played throughout China, and hulusi are manufactured in such northern cities as Tianjin. Like the related free reed pipe called bawu, the hulusi has a very pure, clarinet-like sound.

Although the hulusi is still predominantly performed in China, it has in recent years been adopted by European composers and performers. Rohan Leach from England, Rapheal De Cock from Belgium and Herman Witkam from the Netherlands have all taken the instrument in new directions.

A similar instrument called hulusheng is a mouth organ with a gourd wind chest.