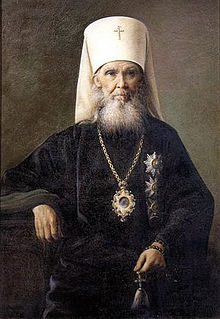 Macarius II, Metropolitan of Moscow. In the Russian Orthodox Church a white klobuk is distinctive of a metropolitan.

In Christian churches with episcopal polity, the rank of metropolitan bishop, or simply metropolitan, [1] pertains to the diocesan bishop or archbishop (then more precisely called metropolitan archbishop) of a metropolis; that is, the chief city of a historical Roman province, ecclesiastical province, or regional capital.

Before the establishment of patriarchs (beginning in AD 325), metropolitan was the highest episcopal rank in the Eastern rites of the Church. They presided over synods of bishops, and were granted special privileges by canon law and sacred tradition.

The Early Church structure generally followed the Roman imperial practice, with one bishop ruling each city and its territory.[2] The bishop of the provincial capital, the metropolitan, enjoyed certain rights over other bishops in the province, later called suffragans.[2] 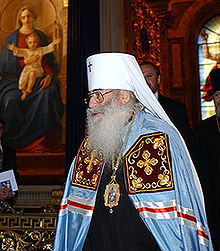 In neither case do metropolitans have any special authority over other ruling bishops within their provinces. However, metropolitans (archbishops in the Greek Orthodox Church) are the chairmen of their respective synods of bishops, and have special privileges. 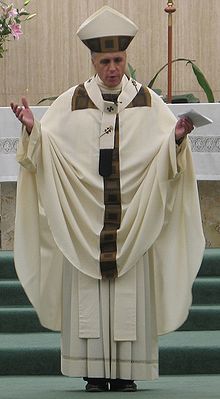 Cardinal Daniel DiNardo is the Metropolitan Archbishop of Galveston-Houston. In the Catholic Church, the pallium is unique to a metropolitan bishop.

In the Roman Catholic Church, ecclesiastical provinces, composed of several neighbouring dioceses,[4] are each headed by a metropolitan, the archbishop of the diocese designated by the Pope.[5] The other bishops are known as suffragan bishops.

The metropolitan also has the liturgical privilege of celebrating sacred functions throughout the province, as if he were a bishop in his own diocese, provided only that, if he celebrates in a cathedral church, the diocesan bishop has been informed beforehand.[8]

The metropolitan is obliged to request the pallium, a symbol of the power that, in communion with the Church of Rome, he possesses over his ecclesiastical province.[9] This holds even if he had the pallium in another metropolitan see.

As of April 2006, 508 archdioceses were headed by metropolitan archbishops, 27 archbishops were not metropolitans, and there were 89 titular archbishops. See also Catholic Church hierarchy for the distinctions.

In the Eastern Catholic Churches, the metropolitan is the head of those autonomous particular Churches that, though they consist of several eparchies, are not large enough to be placed under the authority of a patriarch or a major archbishop. They are therefore somewhat more subject than patriarchal or major archiepiscopal Churches to oversight by the pope and the Congregation for the Oriental Churches.

In the Anglican Communion, a metropolitan is generally the head of an ecclesiastical province (or cluster of dioceses) and ranks immediately under the primate of the national church (who is often also a metropolitan). Most metropolitans, but not all, are styled archbishop.