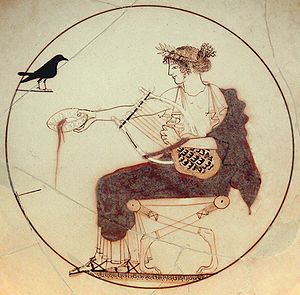 Apollo with the tortoise-shell lyre, on a 5th-century BC drinking cup (kylix)

The music of ancient Greece was almost universally present in society, from marriages and funerals to religious ceremonies, theatre, folk music and the ballad-like reciting of epic poetry. It thus played an integral role in the lives of ancient Greeks. There are significant fragments of actual Greek musical notation[1][2] as well as many literary references to ancient Greek music, such that some things can be known—or reasonably surmised—about what the music sounded like, the general role of music in society, the economics of music, the importance of a professional caste of musicians, etc. Even archaeological remains reveal an abundance of depictions on ceramics, for example, of music being performed. The word music comes from the Muses, the daughters of Zeus and patron goddesses of creative and intellectual endeavours.

The difference between music and philosophy

It is common to hear the term "music of the spheres" and read of Pythagoras and his school, who laid the foundations of our knowledge of the study of harmonics—how strings and columns of air vibrate, how they produce overtones, how the overtones are related arithmetically to one another, etc.

It is important to note that the entire study of such things by the Greeks was less a formula for the production of playable music than it was a mathematical and philosophical description of how the universe, in general, was perceived to be constructed—the stars, the sun, the planets, all vibrating in harmony.[citation needed]

At a certain point, Plato complained about the new music:

Our music was once divided into its proper forms...It was not permitted to exchange the melodic styles of these established forms and others. Knowledge and informed judgment penalized disobedience. There were no whistles, unmusical mob-noises, or clapping for applause. The rule was to listen silently and learn; boys, teachers, and the crowd were kept in order by threat of the stick. . . . But later, an unmusical anarchy was led by poets who had natural talent, but were ignorant of the laws of music...Through foolishness they deceived themselves into thinking that there was no right or wrong way in music, that it was to be judged good or bad by the pleasure it gave. By their works and their theories they infected the masses with the presumption to think themselves adequate judges. So our theatres, once silent, grew vocal, and aristocracy of music gave way to a pernicious theatrocracy...the criterion was not music, but a reputation for promiscuous cleverness and a spirit of law-breaking.[3] 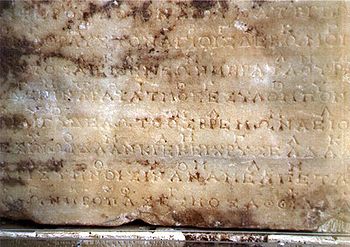 Photograph of the original stone at Delphi containing the second of the two hymns to Apollo. The music notation is the line of occasional symbols above the main, uninterrupted line of Greek lettering.

From his references to "established forms" and "laws of music" we can assume that at least some of the formality of the Pythagorean system of harmonics and consonance had taken hold of Greek music, at least as it was performed by professional musicians in public, and that Plato was complaining about the falling away from such principles into a "spirit of law-breaking".

Playing what "sounded good" violated the established ethos of modes that the Greeks had developed by the time of Plato: a complex system of relating certain emotional and spiritual characteristics to certain modes (scales). The names for the various modes derived from the names of Greek tribes and peoples, the temperament and emotions of which were said to be characterized by the unique sound of each mode. Thus, Dorian modes were "harsh", Phrygian modes "sensual", and so forth. In his Republic,[4] Plato talks about the proper use of various modes, the Dorian, Phrygian, Lydian, etc. It is difficult for the modern listener to relate to that concept of ethos in music except by comparing our own perceptions that a minor scale is used for melancholy and a major scale for virtually everything else, from happy to heroic music. (Today, one might look at the system of scales known as ragas in India for a better comparison, a system that prescribes certain scales for the morning, others for the evening, and so on.)

The sounds of scales vary depending on the placement of tones. Modern Western scales use the placement of whole tones, such as C to D on a modern piano keyboard, and half tones, such as C to C-sharp, but not quarter-tones ("in the cracks" on a modern keyboard) at all. This limit on tone types creates relatively few kinds of scales in modern Western music compared to that of the Greeks, who used the placement of whole-tones, half-tones, and even quarter-tones (or still smaller intervals) to develop a large repertoire of scales, each with a unique ethos. The Greek concepts of scales (including the names) found its way into later Roman music and then the European Middle Ages to the extent that one can find references to, for example, a "Lydian church mode", although name is simply a historical reference with no relationship to the original Greek sound or ethos.

A representation from the 1500s of the Muses dancing.

From the descriptions that have come down to us through the writings of those such as Plato, Aristoxenus[5] and, later, Boethius,[6] we can say with some caution that the ancient Greeks, at least before Plato, heard music that was primarily monophonic; that is, music built on single melodies based on a system of modes/scales, themselves built on the concept that notes should be placed between consonant intervals. It is a commonplace of musicology to say that harmony, in the sense of a developed system of composition, in which many tones at once contribute to the listener's expectation of resolution, was invented in the European Middle Ages and that ancient cultures had no developed system of harmony—that is, for example, playing the third and seventh above the dominant, in order to create the expectation for the listener that the tritone will resolve to the third.

Yet, it is obvious from the following excerpt from Plato's Republic that Greek musicians sometimes played more than one note at a time, although this was apparently considered an advanced technique. The Orestes fragment of Euripides seems to clearly call for more than one note to be sounded at once.[7]. There is also intriguing research[8] in the field of music from the ancient Mediterranean—decipherings of cuneiform music script—that argue for the sounding of different pitches simultaneously and for the theoretical recognition of a "scale" many centuries before the Greeks learned to write, which of course would have been before they developed their system for notating music and recorded the written evidence for simultaneous tones. All we can say from the available evidence is that, while Greek musicians clearly employed the technique of sounding more than one note at the same time, the most basic, common texture of Greek music was monophonic.

That much seems evident from another passage from Plato:

...The lyre should be used together with the voices...the player and the pupil producing note for note in unison, Heterophony and embroidery by the lyre--the strings throwing out melodic lines different from the melodia which the poet composed; crowded notes where his are sparse, quick time to his slow...and similarly all sorts of rhythmic complications against the voices--none of this should be imposed upon pupils...[9] 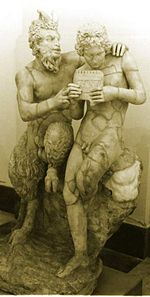 Pan instructing Daphnis on the flute

the Pan pipes, or syrinx.

The function of music in ancient Greek society was bound up in their mythology: Amphion learned music from Hermes and then with a golden lyre built Thebes by moving the stones into place with the sound of his playing; Orpheus, the master-musician and lyre-player, played so magically that he could soothe wild beasts; the Orphic creation myths have Rhea "playing on a brazen drum, and compelling man's attention to the oracles of the goddess"[10]; or Hermes [showing to Apollo] "...his newly-invented tortoise-shell lyre and [playing] such a ravishing tune on it with the plectrum he had also invented, at the same time singing to praise Apollo's nobility[11] that he was forgiven at once..."; or Apollo's musical victories over Marsyas and Pan.[12]

There are many such references that indicate that music was an integral part of the Greek perception of how their race had even come into existence and how their destinies continued to be watched over and controlled by the Gods. It is no wonder, then, that music was omnipresent at the Pythian Games, the Olympic Games, religious ceremonies, leisure activities, and even the beginnings of drama as an outgrowth of the dithyrambs performed in honor of Dionysus.[13]

It may be that the actual sounds of the music heard at rituals, games, dramas, etc. underwent a change after the traumatic fall of Athens in 404 b.c. at the end of the first Peloponnesian War. Indeed, one reads of the "revolution" in Greek culture, and Plato's lament that the new music "...used high musical talent, showmanship and virtuosity...consciously rejecting educated standards of judgement." [14] Although instrumental virtuosity was prized, this complaint included excessive attention to instrumental music such as to interfere with accompanying the human voice, and the falling away from the traditional ethos in music. 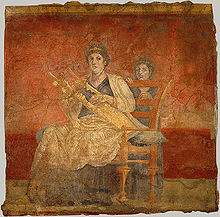 A later Roman representation of a woman playing the kithara

The hydraulis. Note the presence of the curved trumpet, called the bukanē by the Greeks and, later, cornu by the Romans. 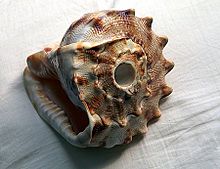 The conch: a sea-shell with a cut opening serving as a mouthpiece

Instruments in all music can be divided into three categories,[15] based on how sound is produced: string, wind, and percussion. (For purposes of this description, we exclude electronic instruments. For alternate systems of classification, see Musical instruments and Hornbostel-Sachs.) Within this system, strings may be struck (ex: piano), bowed (violin) or plucked (guitar). Wind instruments may be single mechanical reed (clarinet) or double mechanical reed (oboe); also, wind instruments may be lip reed (trumpet), air reed (flute), vocal-cord reed (voice) and tuned, free reed (accordion). Percussion instruments may produce either a definite pitch (bell) or an indefinite pitch (bass drum). The following were among the instruments used in the music of ancient Greece:

In the Aeneid, Virgil makes numerous references to the trumpet, most notably having to do with Aeneas' comrade, Misenus: We can assume that the Greeks and Trojans of whom Virgil speaks made use not only of the conch — a sea shell with a cut opening as a mouthpiece — but even of the brass trumpet ("...With breathing brass to kindle fierce alarms...") or salpinx. A number of sources mention this metal instrument (with a bone mouthpiece) and they appear in vase paintings.

The lyre, kithara, aulos, hydraulis and trumpet all found their way into the music of ancient Rome. 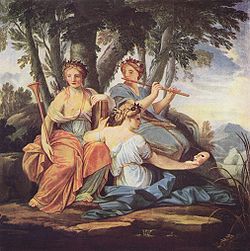 A 17th-century representation of the Greek muses Clio, Euterpe, and Thalia playing a transverse flute, presumably the Greek photinx. 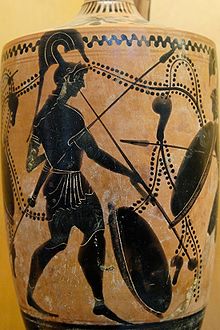 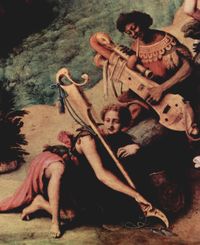 Detail from Piero di Cosimo's 16th-century version of Perseus rescuing Andromeda. The instrument in the hands of the musician is an anachronism and appears to be an imaginary medieval combination of a plucked string instrument and bassoon.