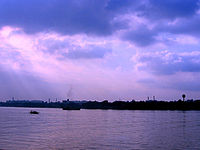 Afternoon view of Howrah from the Millennium Park, Kolkata 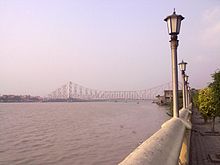 A relatively new park in Kolkata, Millennium Park is situated along the strand on eastern shore of Hooghly River for a stretch of 2.5 km near Babughat and opposite to Koilaghat. The park consists of landscaped gardens and children's amusement rides. It was opened along the riverside to provide a green area for Kolkata's polluted waterway. It is a millennium gift from Kolkata Metropolitan Development Authority (KMDA/CMDA) inaugurated on 26 December 1999. the park is open from 1pm-7pm.