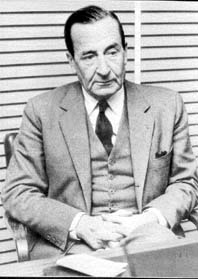 Pedro Eugenio Aramburu Cilveti Army General. Born in , Córdoba on , . He was a major force behind the military uprising against in 1955. He became president of from , to , . He was kidnapped by the leftwing Peronist organization on , 1970, and executed in retaliation for involvement in June 1956, in the execution of General , a loyal Army officer to the Peronist regime.

In September 1955, Aramburu participated in a military coup called the "". He led the hardliners, and assumed the Presidency of Argentina himself, on , , with the support of Admiral Isaac ["El Caballo"] Rojas, who became Vice-President.

The "Revolucion Libertadora" which overthrew was in opposition to Peronist fascism. It was triggered in part by the Perón's violent and public confrontation with the Catholic Church, the Press and the Ambassador of the , as well as the imprisonment opposition leaders and economic pandemonium. The Revolución Libertadora freed all political prisoners, lifted a ban on free press and reestablish democracy calling almost immediately for free elections without the participation of the Peronist Party.

Aramburu's military government forced Perón into Perón and barred the Peronist party from further elections. Known Peronists were persecuted and often imprisoned or murdered. Perón lived in exile in Spain until 1973 under the protection of Generalísimo .

After the end of his presidential term in 1958, Aramburu retired from the military career and devoted himself entirely to politics.

He ran for president in 1963, forming the "Union del Pueblo Argentino" (UDELPA, Union of the Argentine People), with the slogan: "Vote UDELPA and HE won't return" ("Vote UDELPA y no vuelve"), referring to Perón.

With the Peronists banned, the Presidential elections resulted in becoming president, with Aramburu coming in third.

Yet the military retained much real power, censoring both Peronism and its leader. The fragility of Argentine democracy was shown when Illia was overthrown in 1966 by a military coup led by General .

In all those 15 years, Pedro Eugenio Aramburu was popular with much of the press. He often gave his opinions on society and politics (especially in Gente magazine, representative of Argentine high society).

In 1970, he was mentioned as a possible Presidential candidate.

In 1960's, rumors about Perón's return to Argentina were circulated daily. From his exile in , his voice grew stronger and stronger. At the same time, leftist strength grew in Argentina as in much of South America. The example of Che Guevara influenced a generation of students in schools and universities that supported international .

It was in this atmosphere that the , led by Mario Alberto Firmenich were formed.

It is possible that the Montoneros would not have been really relevant had they not chosen the resounding "terrorist" action of kidnapping and executing the former president Pedro Eugenio Aramburu. Many commentators around the world called it a simple case of justice delayed, a "people's execution."

On , at noon, Aramburu was seized on the streets of . Aramburu's disappearance kept Argentinian society on tenterhooks for a month, before it was discovered that Aramburu had been murdered three days after his kidnapping, with his corpse left in a farm in Timote, Carlos Tejedor, in the .

In the following months, statements from the Montoneros flooded the media. Among other things they claimed historical reasons for their actions such as "the execution of 27 Peronist leaders after an unsuccessful Peronist rebellion in 1956", known as the José León Suárez massacre.

In 1974, his body was kidnapped by the Montoneros. The body was to be held until the President brought back 's body.