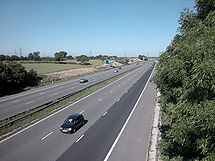 The M56 Motorway, also known as the North Cheshire motorway, is in Cheshire and Greater Manchester, England. It runs from Junction 4 of the M60 to Dunkirk, Cheshire and is 33.3 miles (53.6 km) in length. It is often busy with long-distance commuter traffic towards North Wales. It serves commuters heading to Manchester particularly those from the wider Cheshire area and gives access to Manchester Airport from the national motorway network. [1]

The road forms part of the unsigned Euroroute E22.

Although the main line of the motorway starts as a continuation of the A5103 Princess Parkway, the M56 actually begins on Sharston Spur. After passing through junctions 1 and 2, the spur joins the main line at junction 3, increasing from two lanes to four to accommodate Manchester Airport traffic.

The road then heads south to the west of Wythenshawe and Manchester Airport until it reaches junction 6, where it turns west. It runs to the south of Hale, reducing to three lanes. It passes junctions 7 and 8 which are part of the same complex. Junction 8 was planned to be used by the proposed A556(M)[1]). The current proposals are to upgrade the A556 to a dual carriageway.[2] Traffic for the southbound M6 leaves here and this junction can suffer from congestion. The motorway then enters a more rural setting between Broomedge and High Legh.

After meeting the M6 motorway it passes south of Appleton Thorn. After reaching junction 11, it runs through the outskirts of Runcorn and Frodsham. Between junctions 12 and 14, and the missing junction 13, it runs parallel to the River Mersey and the Manchester Ship Canal. After meeting the M53 motorway, the road finally returns to two lanes, it proceeds between Chester to the south and Ellesmere Port to its termination at Dunkirk, Cheshire where it becomes the A494.

Proposals did exist for an extension into North Wales across the proposed Dee Barrage,[6] but these have not happened.[7]

Until 2008 the M56 terminated at a roundabout at the west end. Work started in 2006 [2] to grade-separate this junction (and others) to allow free-flowing traffic to North Wales. The project was completed in 2008.

At Junction 7 in July 2009, the slip road letting traffic come in southbound along the M56 and turn onto the A556 southbound was closed while the bridge where it crosses the M56 (the Bowdon View Bridge), which for many years had had a weight restriction, was worked on; traffic intending to use it had to carry on to junction 10 and there turn round, or go through the center of Altrincham; traffic for the simultaneous nearby Tatton Park Flower Show, and the resulting simultaneous closure to through traffic of the minor road along the southwest edge of Tatton Park from Ashley, Cheshire to Mere, Cheshire, which would otherwise have acted as a bypass for people living in the area, added to the resulting congestion.

"The M56 corridor" is a term used by estate agents and social geographers to describe what is considered to be a relatively affluent area of North West England, within easy reach of the M56. The area includes the cities of Manchester and Chester, and commuter towns and villages in rural Cheshire. It also includes Warrington and St Helens where the chemical and pharmaceutical industries are prominent.[13]