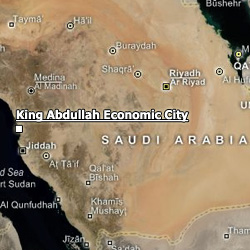 With a total development area of 173 km² (66.8 sq mi), the city is located along the coast of the , around 100 km north of , the commercial hub of the kingdom, the city is also going to be approximately an hour away from the holy Islamic cities of and by car. And as reportedly an hour away of all Middle Eastern capital cities by plane. The total cost of the city is $26.6 billion (around SR 100 billion), with the project being built by . A -listed company created from , a -based Public Joint Stock Company and one of the world’s largest real estate companies, and (Saudi Arabian General Investment Authority) which is the main facilitator of the project.

The city, along with other five economic cities, is a part of an ambitious "10×10" program to place Saudi Arabia among the world’s top ten competitive investment destinations by the year 2010, planned by SAGIA. The first stage of the city is planned to be completed in 2010, while the whole city is going to be fully completed by 2020. The city will help diversify the oil-based economy of the kingdom by bringing direct foreign and domestic investments. The city also will help create up to one million jobs for the youthful population of the country, where 40% of the population are under 15 [cite web|url=http://news.bbc.co.uk/2/hi/middle_east/7446923.stm|title=BBC - New cities rise from Saudi desert] [cite web|url=http://www.nytimes.com/2008/01/20/business/worldbusiness/20saudi.html?ref=business&pagewanted=all|title=New York Times - The Construction Site Called Saudi Arabia] .

The Industrial Zone is estimated to cover 63 million m². The 4,400 hectares of land will be dedicated to industrial and light manufacturing facilities - identified as key growth drivers for the Saudi economy - and can now host 2,700 industrial tenants. The jobs created estimated to be in industrial and light industries (330,000); research and development (150,000); business and office (200,000); services (115,000); hospitality (60,000) and education and community services (145,000). The "Plastics Valley" planned within the zone will use raw materials readily available in Saudi Arabia to produce high-end plastics used in automotive, biomedical, construction and food packaging industries.

The Sea Port is estimated to cover 13.8 million sq meters, it will be the largest in the region with a capacity of over TEU|10 million|first=yes of containers per year. The port will have facilities to handle cargo and dry bulk, and will be equipped to receive the world’s largest vessels. Another key component of the Port will be a custom-built Hajj Terminal with a capacity to handle up to 300,000 pilgrims on their way to Mecca and Medina, the holy Muslim cities.

The Resorts Area will be designed to feature services and amenities, hoping to draw both local and international tourists. Set to become a major destination on the map of Saudi Arabia and the map of the as a whole. It will include hotels, shopping centers and other recreational facilities. The number of hotel rooms and suites are proposed to be 25,000 hotel rooms in more than 120 hotels.Among the tourist draws at the resort is an 18-hole , with training facilities and driving range. An equestrian club, yacht club and a range of water sports will also be constructed.

The Educational Zone is a part of plan to bring the Saudis capabilities and aspirations in technology to globally competitive levels. The Educational Zone is planned to consist of multi-university campus flanked by two Research & Development parks. The multi-university campus is designed to accommodate 18,000 students, and a 7,500 faculty and staff members.

The Central Business District (CBD) is planned to offer 3.8 million m² of office space, hotels and mixed-use commercial space. The Financial Island, within the CBD, has now been doubled in area to cover 14 hectares of land, which will be the largest regional financial nerve center for the world’s leading banks, investment houses and insurance groups.

Emaar, E.C. and have also signed several memorandums of understanding (MoU) and contracts with international and local developers in many fields. These developers include: