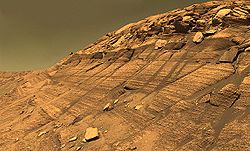 There are hundreds of thousands of craters on Mars larger than 1 km, but only about 1000 of them have names. Names are assigned by the International Astronomical Union after petitioning by relevant scientists, and in general, only craters that have a significant research interest are given names. Martian craters are named after famous scientists and science fiction authors, or if less than 60 km in diameter, after towns on Earth. Craters cannot be named for living people, and names for small craters are rarely intended to commemorate a specific town.[1] Latitude and longitude are given as planetographic coordinates with west longitude.