Dalat is the administrative town of the Dalat district in Mukah Division, Sarawak, East Malaysia. It is situated by the Oya river. The district covers areas from Kg. Penat to Oya, and from Muara Sg. Kut to Ulu Baoh. There are 3 small towns, 23 villages and 22 longhouses in the district[3]. 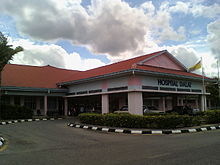 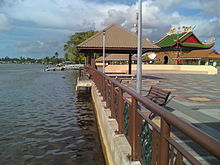 The waterfront by the Oya river as seen in December 2010

Dalat town has one secondary school which is SMK Dalat. Two other secondary schools are SMK Oya, which is located in Oya and SMK Batang Igan, which is located by the Igan river. There are quite a number of primary schools in Dalat. In fact, most villages have their own primary school. Dalat town also has a post office, district office, a hospital, a stadium (Stadium Perpaduan Dalat), a few blocks of shophouses, a Catholic church(St. Bernard Church), a Methodist Church, a Chinese temple (age more than a century), a district mosque and etc. There is also a newly constructed waterfront. Unfortunately, there is only a bank in Dalat, RHB Bank.

Most of the people use the Melanau language to communicate here. There is a slight difference of the language between each villages, yet they can understand each other very well. Other languages such as Malay, Sarawak Malay, Iban, Mandarin, Hokkien and English are also widely spoken. 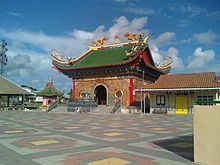 The Chinese temple in Dalat

Dalat, N.50 is represented at the State Legislative Assembly by Datin Hajah Fatimah Abdullah @ Ting Sai Ming, from Parti Pesaka Bumiputera Bersatu. She won the seat in the 10th State Election 2011 for the third time. For Parliament, Dalat district is under Parliament 213: Mukah.

Dalat is accessible by road. There are daily express bus services connecting Dalat and Miri via Bintulu and Mukah.

The nearest airport is Mukah Airport. The locals however prefer to use either Bintulu Airport or Sibu Airport to fly to Kuala Lumpur particularly.

River transportation is still very vital in Dalat. There are speed boats connecting Dalat and Sibu with a fee of MYR 20. The journey takes approximately 2 hours. 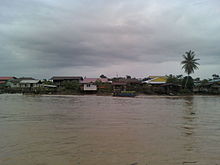 Kg. Brunei, this is how a typical Melanau village looks like in Dalat

The people here particularly the Melanaus are still practicing their culture. The Melanaus are famous for their traditional food such as umai, sago worms and the sago pearls. Also, there is a carnival named Karnival Balau (Balau is the Sago palm in Melanau language) which is held annually, and also a regatta, held few years once. Some major celebrations here are Christmas, Hari Raya Aidilfitri, Chinese New Year and the Kaul Festival. The Kaul Festival is celebrated on different dates for different villages.