Osterley is a London Underground station in Osterley in west London. The station is on the Heathrow branch of the Piccadilly Line, between Boston Manor and Hounslow East. The station is located on Great West Road (A4) close to the National Trust-owned Osterley Park. It is in Travelcard Zone 4. The daily Parking fee is £4.50.

In 2009, because of financial constraints, TfL decided to stop work on a project to provide step-free access at Osterley and five other stations, on the grounds that these are relatively quiet stations and some are already one or two stops away from an existing step-free station.[2] Osterley, for example, is one station away from Hounslow East where step-free access was provided in 2005.[3] Two lifts would have been installed at Osterley to provide step-free access from street level to each platform via an existing bridge with a lobby at platform level for each lift, at a cost of £12.7 million.[4] Just under £4 million was spent on West Kensington before the project was halted.[5]

The current Osterley station was opened on 25 March 1934 adjacent to the Great West Road which had been opened in 1925. The station was designed by Stanley Heaps in the modern European style used elsewhere on the Piccadilly line by Charles Holden.[6] The design uses brick, reinforced concrete and large areas of glass and features a brick tower topped with a concrete "obelisk". It was served from its outset by trains from the District and Piccadilly Lines, although District Line services were withdrawn on 9 October 1964.

Osterley station was a replacement for an earlier station, Osterley & Spring Grove located about 300m to the east which was closed when Osterley opened.

Osterley & Spring Grove station and the tracks through the current station were opened by the District Line's predecessor, the Metropolitan District Railway (MDR), on 1 May 1883 as a line to Hounslow Town (located on Hounslow High Street but now closed). 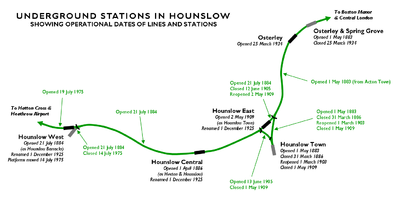 Map showing operational dates for lines and stations in Hounslow

Electrification of the MDR's tracks took place between 1903 and 1905 with electric trains replacing steam trains on the Hounslow branch from 13 June 1905. When the branch was electrified, the track between Osterley & Spring Grove and Heston & Hounslow was closed and a new loop was opened from Hounslow Town back to Heston & Hounslow. Trains would run from Osterley & Spring Grove to Hounslow Town then reverse and run to Hounslow Barracks.

This method of operation was unsuccessful and short-lived. On 2 May 1909 the track between Heston & Hounslow and Osterley & Spring Grove was reopened with a new Hounslow Town station (now Hounslow East) located about 300m west of the loop to the old station. The old Hounslow Town station and its two loop tracks were closed for good.

Piccadilly Line services, which had been running as far as Northfields since January 1933 were extended to run to Hounslow West on 13 March 1933.

Osterley station is served by the H91 bus route, which runs east to Hammersmith through Chiswick and west to Hounslow West.

Osterley is one of the closest stations to British Sky Broadcasting's offices near Gillette Corner. Sky jointly runs a minibus with Harrods to the station every 15 minutes during extended office hours for visitors and staff. The bus may be labelled Sky or Harrods.