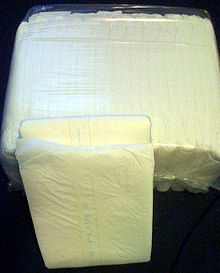 A bag of Abena X-Plus diapers

Diaper fetishism, nappy fetishism or diaperism, is a sexual fetish in which a person feels a desire to wear or use diapers. This is normally not due to a medical need.

Diaper fetishism is independent from pedophilia.[1] Being forced to wear diapers as a form of humiliation is sometimes a behavior encountered in sexual masochism.[2]

As of 2009[update], little analysis of this paraphilia has been reported in medical literature.[3][1]

Those with diaper-related paraphilias differ widely in their focus of attention. There is no singular or archetypical behavior; therefore, a wide range of thought patterns and behaviors exist, but all tends to be a harmless and efficatious release from some kind of pressure.

While wearing diapers, a diaper fetishist generally experiences a comforting feeling of being intimately cared for. This tends to produce a sense of being set free from social or job-related pressures, or from personal responsibilities, as it offers an easy escape into the simplicity of how they imagine a child might feel. Regression fantasies are fairly common and can be of any age, from new-born, to toddlers, to teenagers. While in such an intentionally induced state of regression, the 'normal' persona is voluntarily and temporarily relinquished, in a fantasized 'exchange' for the innocent state of helplessness. It is important to know that while some may at times go so far as to act indistinguishably from a baby, they do, in reality, never lose control but voluntarily (and temporarily) relinquish it. However, most practice their diaper fantasies (i.e. the wearing of diapers) in a way that would probably not be noticed by passersby on the street.

Some are aroused from "wetting" (Urination) their diapers, or, to a lesser extent, "messing" (defecation) in the diapers.[4] Some do not use the diapers at all, for arousal, or bladder and bowel movements.[1]

Diaper fetishes are often associated with paraphilic infantilism. Similarly, diaper lovers (DLs for short) are often associated with the adult babies (ABs).[dubious – discuss] While there is some commonality, they are not identical. The majority of diaper lovers do not engage in any kind of babyish activities and only solely are interested in diapers. However they are sometimes collectively referred to as AB/DLs.[5] Being an AB is unrelated to pedophilia as it involves behaving and being treated like an infant, and not sexual interest in children.[6] Inside the AB/DL communities, a sharp distinction is observed. The majority of these communities will actively expel child molesters.[7]

Some rubber and plastic fetishists have an affinity for diapers and rubber pants. In the case of disposable diapers, this attraction would be to their crinkly plastic backing. In the case of cloth diapers, it would be towards the latex or pvc of the pants worn over them.

Omorashi (オモラシ / おもらし / お漏らし?) is a fetish subculture recognized predominantly in Japan, in which participants experience arousal from having a full bladder or a sexual attraction to someone else experiencing the feeling of a full bladder. For such fetishists, climax usually coincides with the moment of relief and embarrassment experienced when the desperate individual loses bladder control. Some subsets of omorashi fandom utilize diapers, in which case it is referred to as omorashi omutsu, or less commonly, omorashi oshime, both of which translate as "to wet oneself in a diaper."