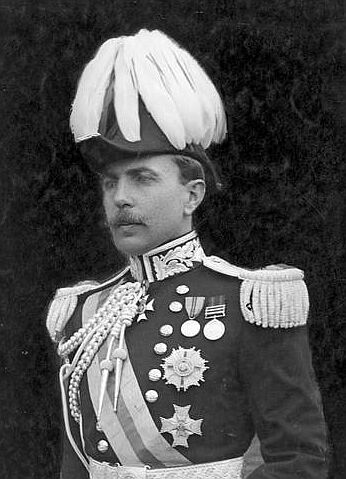 Born in , Denman was the son of Thomas Denman, a court clerk. , Lord Chief Justice of the King's Bench, was his great-grandfather. He was educated at Sandhurst, intending a military career. He unexpectedly inherited his title from his great-uncle in 1894 and was able to take his seat in the on his 21st birthday the following year. He had little money until 1903, when he married Gertrude Pearson, daughter of the wealthy industrialist Weetman Pearson (later first Viscount Cowdray). Denman was then able to devote his time to politics, and served in the Liberal administrations of and as a (government whip in the House of Lords) from 1905 to 1907 and as (government chief whip in the House of Lords) between 1907 and 1911. He was admitted to the Privy Council in 1907. It seems that the offered Denman the post of Governor-General of Australia to get him out of politics.

The Denmans arrived in in July 1911. They found 's Labor government firmly in control. As the most politically liberal Governor-General yet appointed, he got on well with the Labor ministers, and his modesty and generosity with his father-in-law's money made him popular with the public. In October 1912, the , "evicted" him from . On , he inaugurated the new national capital and Lady Denman formerly announced its name, .

But Denman found that he had less real political influence than any previous Governor-General. As Australia, along with the other s, achieved political maturity, the Prime Minister communicated directly with his British counterpart, cutting the Colonial Secretary and the Governor-General out of the loop. The appointment of an Australian High Commissioner in London further reduced the Governor-General's diplomatic role.

In June 1913 the Labor government was unexpectedly defeated at the general elections by 's Liberals. But Labor retained control of the Senate, and was determined to frustrate Cook's government at every turn. By early 1914 it was clear that a constitutional crisis was developing. He was in poor health—that he was allergic to Australia's national flower, the wattle, did not help—and his marriage was suffering from his wife's unhappiness at being so far from home. He felt he lacked the strength to deal with the political situation, and in May 1914 he resigned.

With the outbreak of , Denman commanded a Yeomanry regiment in 1914 and 1915. He remained loyal to Asquith and the Liberals and so did not hold office again, leading a quiet life until his death in , , 22 days after his wife.