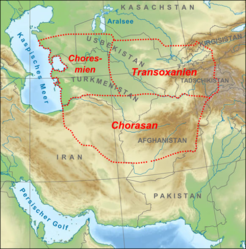 Historical Transoxiana (to North-East), together with Khorasan (South) and Khwarezm (North-West)

Transoxiana (also spelled Transoxiania, called Ma Wara'un-Nahr (Arabic: ما وراء النهر‎) / Hé Zhōng (Chinese: 河中)) is the ancient name used for the portion of Central Asia corresponding approximately with modern-day Uzbekistan, Tajikistan, southern Kyrgystan and southwest Kazakhstan. Geographically, it is the region between the Amu Darya (Ancient Greek: Ώξος Ōxos) and Syr Darya rivers.[1] When used in the present, it usually implies that one is talking about that region in the time prior to about the 8th century, although the term continued to remain in use among western historians for several centuries after. In the Persian epic Shahnameh, written by the poet Ferdowsi, Transoxiana is the homeland of the Iranian nomadic tribes and the Oxus river is the border between Iran and Turan.

The region was one of the satrapies of the Achaemenid dynasty of Persia under the name Sogdiana. Transoxiana, however, is Latin, and literally means "across the Oxus River", the Greek name for the Amu Darya, which describes the region perfectly from the viewpoint of the Greeks and Romans. The Arabic "mā warā' an-nāhr", "that which is beyond the river", is an alternative name for the country, and is also rendered Mawarannahr.

The name Transoxiana stuck in Western consciousness because of the exploits of Alexander the Great, who extended Greek culture into the region with his conquests of the 4th century BC; Transoxiana was the most northeastern point of the Hellenistic culture, and in fact kept a hybrid Greek/Persian/Chinese/Buddhist culture, dubbed 'Serindian', until the Arabic invasion. During the Sassanid Empire, it was often called Sogdiana, a provincial name taken from the Achaemenid Empire, and used to distinguish it from nearby Bactria.

The Chinese explorer Zhang Qian, who visited the neighbouring countries of Bactria and Parthia along with Transoxiana in 126 BC, made the first known Chinese report on this region. Zhang Qian clearly identifies Parthia as an advanced urban civilization that farmed grain and grapes, made silver coins and leather goods.[2]

In Sassanid times, the region became a major cultural and scientific center due to effective royal authority and the wealth derived from the Northern Silk Road. Many Persian nobles and landlords escaped to this region after the Muslim invasion. Following the Arab conquest, the area became known as Ma wara'un-Nahr (Arabic, "what is beyond the river").

Transoxiana's major cities and cultural centers are Samarkand and Bukhara. Both are in the southern portion of Transoxiana, (though still to the north of the Amu Darya itself, on the river Zeravshan), and the majority of the region was dry but fertile plains. Both cities remained centers of Persian culture and civilization after the Islamic conquest of Iran, and played a crucial role in the revival of Persian culture with establishment of the Samanid dynasty.

Genghis Khan invaded Transoxiana in 1219 during his conquest of Khwarezm. Before his death in 1227, he assigned the lands of Western Central Asia to his second son Chagatai, and this region became known as the Chagatai Khanate. In 1369, Timur, of the Barlas tribe, became the effective ruler while continuing the ceremonial authority of Chagatai Khan's dynasty, and made Samarkand the capital of his future empire. Transoxiana was known to be flourishing in the mid-14th century.[3]