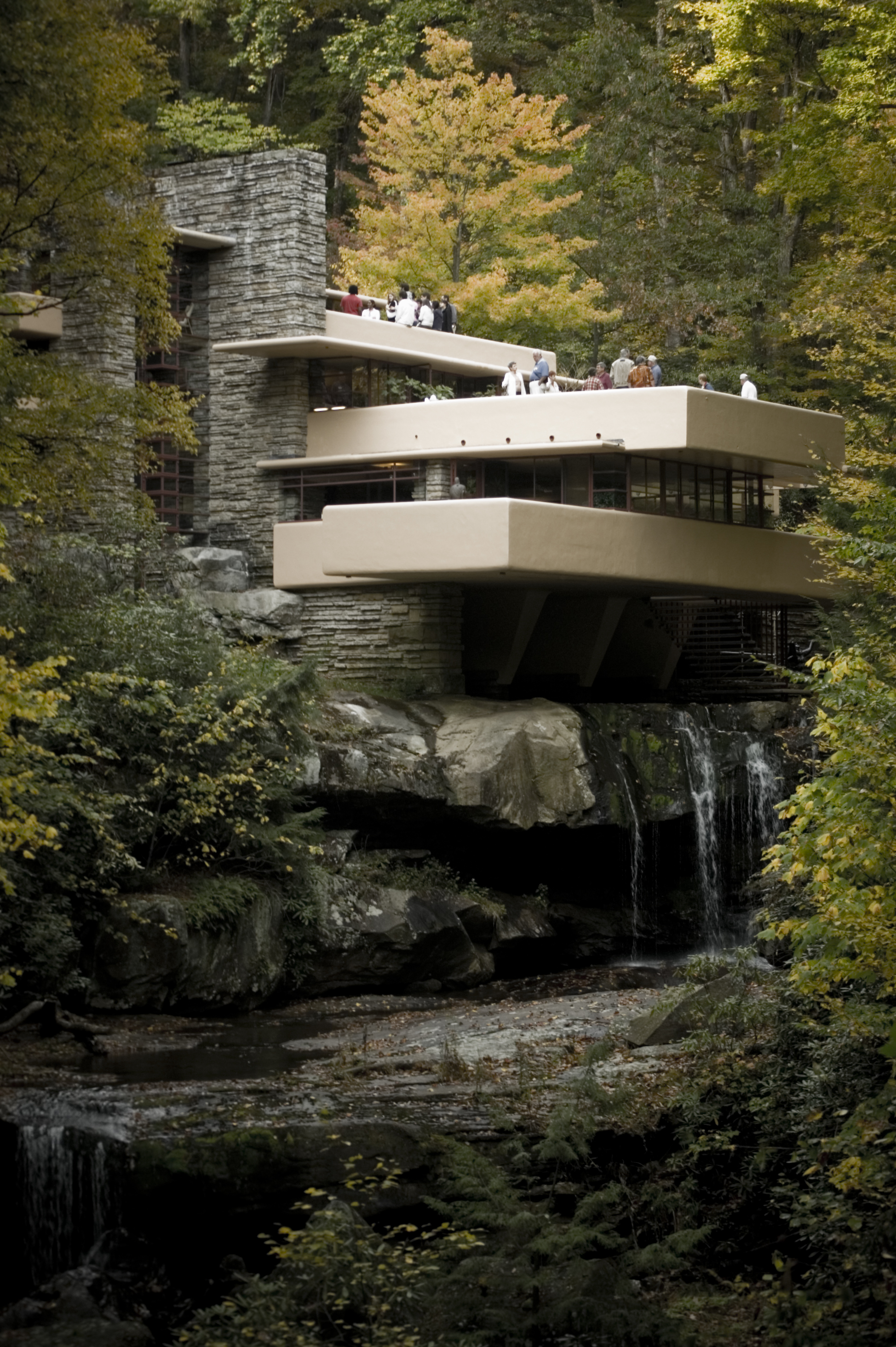 Fallingwater, also known as the Edgar J. Kaufmann Sr. Residence, is a designed by American in 1935 in rural southwestern , 50 miles southeast of Pittsburgh, and is part of the . The house was built partly over a waterfall in at Rural Route 1 in the Mill Run section of Stewart Township, , in the of the .

Edgar Kaufmann Sr. was a successful Pittsburgh businessman and founder of Kaufmann's Department Store. His son, , studied under Wright briefly.

Edgar Sr. had been prevailed upon by his son and Wright to itemize the cost of his utopian model city. When completed, it was displayed at Kaufmann’s Department Store and Wright was a guest in the Kaufmann home, “La Tourelle”, a French Norman masterpiece that celebrated Pittsburgh architect (1874-1964) had created in the stylish Fox Chapel suburb in 1923 for Edgar J. Kaufmann. The Kaufmanns and Wright were enjoying refreshments at La Tourelle when Wright, who never missed an opportunity to charm a potential client, said to Edgar Jr. in tones that the elder Kaufmanns were intended to overhear, “Edgar, this house is not worthy of your parents…” The remark spurred the Kaufmann’s interest in something worthier. Fallingwater would become the end result.

The Kaufmanns owned some outside Pittsburgh with a and some cabins. When the cabins at their camp had deteriorated to the point that something had to be rebuilt, Mr. Kaufmann contacted Wright.

In November 1934 Wright visited Bear Run. He asked for a survey of the area around the waterfall, which he received in March 1935. This survey was prepared by Fayette Engineering Company of and included all of the s, s and topography. It took 9 months for his ideas for the site to crystallize into a design which was quickly sketched up by Wright in time for a visit by Kaufmann to Taliesin in September 1935. [McCarter, page 59.] .

The structural design for Fallingwater was undertaken by Wright in association with Mendel Glickman and William Wesley Peters who had been responsible for the design of the revolutionary columns which were a feature of Wright’s design for the .

Preliminary plans were issued to Kaufmann for approval on 15 October 1935 [ McCarter, page 12.] after which Wright made a further visit to the site and provided a cost estimate to his client. In December 1935 an old rock quarry was opened to the west of the water to provide the stones needed for the house’s walls.Wright only made periodic visits to the site during construction, instead assigning Bob Mosher who was one of his apprentices as his permanent on-site representative. [ McCarter, page 12.] The final working drawings were issued by Wright in March 1936 with work beginning on the bridge and the main house in April 1936. The construction was plagued by conflicts between Wright, Kaufmann and the construction contractor.

Kaufmann had Wright’s design reviewed by a firm of consulting engineers as he doubted whether Wright had sufficient experience with using reinforced concrete. Upon receiving their report Wright took offense and immediately requested Kaufmann to return his drawings and indicated he was withdrawing from the project. Kaufmann apologized and the engineer’s report was subsequently buried within a stone wall of the house. [ McCarter, page 12.] .

After a visit to the site, Wright in June 1936 rejected the concrete work for the bridge, which had to be rebuilt.

For the cantilevered floors Wright and his team used integral upside-down beams with the flat slab on the bottom forming the ceiling of the space below. The contractor, Walter Hall, who was also an engineer, produced independent computations and argued for increasing the reinforcement in the first floor’s slab. Wright rebuffed the contractor. While some sources state that it was the contractor who quietly doubled the amount of reinforcement, according to others [McCarter, page 12.] , it was at Kaufmann’s request that his consulting engineers redrew Wright’s reinforcing drawings and doubled the amount of steel specified by Wright. This additional steel not only added weight to the slab but was set so close together that the concrete often could not properly fill in between the steel, which weakened the slab. In addition the contractor didn’t build in a slight upward incline in the formwork for the cantilever to compensate for the settling and drooping of the cantilever once the concrete had cured and the formwork was removed. As a result the cantilever developed a noticeable droop. Upon finding out what had been done Wright temporarily replaced Mosher with . [McCarter, pages 12 and 13.]

The consulting engineers with Kaufmann’s approval arranged for the contractor to install a supporting wall under the main supporting beam for the west terrace. When Wright discovered it on a site visit he had Mosher discreetly remove the top course of stones. When Kaufmann later confessed to what had been done, Wright showed him what Mosher had done and pointed out that the cantilever had held up for the past month under test loads without the wall’s support. [McCarter, pages 13.]

In October 1937 the main house was completed.

Use of the house

Fallingwater was the family's weekend home from 1937 to 1963. In 1963, Kaufmann, Jr. donated the property to the . In 1964 it was opened to the public as a museum and nearly five million people have visited the house since (as of January 2008). It currently hosts more than 120,000 visitors each year.

Fallingwater stands as one of Wright's greatest masterpieces both for its [http://www.gibson-design.com/images/sketch-kaufmann2.jpgdynamism] and for its integration with the striking natural surroundings. The extent of Wright's genius in integrating every detail of this design can only be hinted at in photographs. This organically designed private residence was intended to be a nature retreat for its owners. The house is well-known for its connection to the site: it is built on top of an active waterfall which flows beneath the house. The in the living room is composed of boulders found on the site and upon which the house was built &mdash; one set of boulders which was left in place protrudes slightly through the living room . Wright had initially intended that these boulders would be cut flush with the floor, but this had been one of the Kaufmann family's favorite sunning spots, so Mr. Kaufmann insisted that it be left as it was. The stone floors are waxed, while the hearth is left plain, giving the impression of dry rocks protruding from a stream.

Integration with the setting extends even to small details. For example, where glass meets stone walls, there is no metal frame; rather, the glass is caulked directly to the stone. There are stairways directly down to the water. And in the "bridge" that connects the main house to the guest and servant building, a natural boulder drips water inside, which is then directed back out. Bedrooms are small, some even with low ceilings, perhaps to encourage people outward toward the open social areas, decks, and outdoors.

The active stream (which can be heard constantly throughout the house), immediate surroundings, and locally quarried stone walls and ed terraces (resembling the nearby rock formations) are meant to be in harmony, in line with Wright's interest in making buildings that were more "organic" and which thus seemed to be more engaged with their surroundings. Although the waterfall can be heard throughout the house, it can't be seen without going outside. The design incorporates broad expanses of windows and the balconies are off main rooms giving a sense of the closeness of the surroundings. The experiential climax of visiting the house is an interior staircase leading down from the living room allowing direct access to the rushing stream beneath the house.

Wright's views of what would be the [http://www.gibson-design.com/images/sketch-kaufmann.jpgentry] have been argued about; still, the door Wright considered the main door is tucked away in a corner and is rather small. Wright's idea of the grand facade for this house is from the perspective of all the famous pictures of the house, looking up from downstream, viewing the opposite corner from the main door.

On the hillside above the main house is a four-car carport (though the Kaufmanns had requested a garage), servants' quarters, and a guest bedroom. This attached outbuilding was built one year later using the same quality of materials and attention to detail as the main house. Just uphill from it is a small swimming pool, continually fed by a natural water, which then overflows to the river below.

The conducted an intensive program to preserve and restore Fallingwater. The structural work was completed in 2002. This involved a detailed study of the original design documents, observing and modeling the structure's behavior, then developing and implementing a repair plan.

The study indicated that the original structural design and plan preparation had been rushed and the cantilevers had significantly inadequate reinforcement. As originally designed by Wright, the cantilevers would not have held their own weight.

The 2002 repair scheme involved temporarily supporting the structure; careful, selective, removal of the floor; post-tensioning the cantilevers underneath the floor; then restoring the finished floor.

Given the humid environment directly over running water, the house also had mold problems. The senior Mr. Kaufmann called Fallingwater "a seven-bucket building" for its leaks, and nicknamed it "Rising " (Brand 1995).