Amakusa Shirō
In this Japanese name, the family name is "Amakusa". 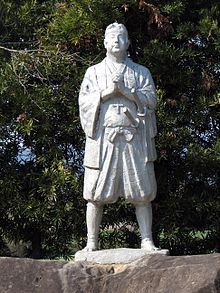 The son of former Konishi clan retainer Masuda Jinbei (益田 甚兵衛?) (according to some sources, Shirō may have been the illegitimate son of Toyotomi Hideyori), Shirō was born in modern-day Kami-Amakusa, Kumamoto in a Catholic family. The charismatic 15-year-old was known to his followers as "heaven's messenger." Miraculous powers were attributed to him.[1]

Shiro led the defence of Hara Castle and died when it fell. Executed in the aftermath of the fall, his head was displayed on a pike in Nagasaki for a very long time afterward as a warning to any other potential Christian rebels. His death poem was: "Now, those who accompany me in being besieged in this castle, will be my friends unto the next world." (Ima rōjō shiteiru mono wa, raise made tomo to naru.)

Amakusa Shiro is often cast as a tragic villain in Japanese popular culture. Such portrayal includes Makai Tensho, a story about the fictional battles of Yagyu Jubei, in which Amakusa Shiro rejects the Christian God at the time of his death and becomes a demon, returning to Earth to destroy the Tokugawa shogunate who put him to death with some of Japan's greatest heroes and villains of the age who were also resurrected as demons. A fictionalized Amakusa appears as the antagonist in Kinji Fukasaku's movie Samurai Reincarnation. In the anime series Rurouni Kenshin, the antagonist Amakusa Shōgo is said to be the "second coming" of Amakusa Shirō. Shiro Amakusa is a recurring character in the Samurai Shodown series of fighting games, featured as both a boss (in the first Samurai Shodown game, which is loosely based on the Shimabara Rebellion) and a selectable character, in which he is a mad and vengeful spirit, resurrected as a being of destruction; his evil side is Aku Amakusa.[2][3][4]

Amakusa Shiro was portrayed in a positive light was the 1962 movie Amakusa Shiro Tokisada (distributed in the UK as The Rebel and in the US as The Revolutionary). The manga Amakusa 1637 is a story is about a girl from the present world replacing the role of Shiro because he was killed. Karen Joy Fowler's short story "Shimabara" concerns Amakusa Shirō and the siege of Castle Hara. Japanese doll and figure company Volks have released an SD13 sized Super Dollfie based on Amakusa named Amakusa Shirou Tokisada.

This article incorporates text from OpenHistory.