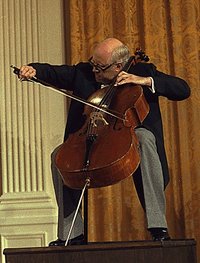 The Duport Stradivarius being played by Mstislav Rostropovich in 1978.

The Duport Stradivarius is a cello made in 1711 by Italian luthier Antonio Stradivari of Cremona. The instrument is named after Jean-Louis Duport, who played it around 1800. In 1812, Duport permitted Napoleon Bonaparte to handle it; a dent, still visible on the instrument, is said to have resulted from the emperor's rough handling while straddling the cello with his boots. Auguste-Joseph Franchomme set a price record by purchasing it for FRF25,000 in 1843 from Duport's son. The instrument maker Jean Baptiste Vuillaume used the Duport as the primary model for his cellos. The Duport is one of the most valuable extant Stradivari cellos. It was owned and played from 1974 to 2007 by Mstislav Rostropovich.

The instrument is presently owned by Rostropovich's heirs.[1]