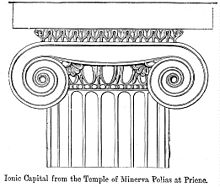 Ionic capital, from the temple of Athena Polias, Priene, Ionia, in a 19th-century engraving

In architecture the capital (from the Latin caput, 'head') forms the topmost member of a column (or pilaster). It mediates between the column and the load thrusting down upon it, broadening the area of the column's supporting surface. The capital, projecting on each side as it rises to support the abacus, joins the usually square abacus and the usually circular shaft of the column. The capital may be convex, as in the Doric order; concave, as in the inverted bell of the Corinthian order; or scrolling out, as in the Ionic order. These form the three principal types on which all capitals are based. The Composite order (illustration, right), established in the 16th century on a hint from the Arch of Titus, adds Ionic volutes to Corinthian acanthus leaves.

From the highly visible position it occupies in all colonnaded monumental buildings, the capital is often selected for ornamentation; and is often the clearest indicator of the architectural 'order' (see Orders of architecture). The treatment of its detail may be an indication of the building's date.

The two earliest Egyptian capitals of importance are those based on the lotus and papyrus plants respectively, and these, with the palm tree capital, were the chief types employed by the Egyptians, until under the Ptolemies in the 3rd to 1st centuries BCE, various other river plants were also employed, and the conventional lotus capital went through various modifications.

Some kind of volute capital is shown in the Assyrian bas-reliefs, but no Assyrian capital has ever been found; the enriched bases exhibited in the British Museum were initially misinterpreted as capitals.

In the Achaemenid Persian capital the brackets are carved with the lion or the griffin projecting right and left to support the architrave; on their backs they carry other brackets at right angles to support the cross timbers. The profuse decoration underneath the bracket capital in the palaces of Xerxes at Susa and elsewhere, serves no structural function, but gives some variety to the extenuated shaft.

The earliest Aegean capital is that shown in the frescoes at Knossos in Crete (1600 BCE); it was of the convex type, probably moulded in stucco. Capitals of the second, concave type, include the richly carved examples of the columns flanking the Tomb of Agamemnon in Mycenae (c. 1100 BCE): they are carved with a chevron device, and with a concave apophyge on which the buds of some flowers are sculpted.

The Doric capital is the simplest of the five Classical orders: it consists of the abacus above an ovolo molding, with an astragal collar set below. In the Temple of Apollo, Syracuse (c. 700 BCE), the echinus moulding has become a more definite form: this in the Parthenon reaches its culmination, where the convexity is at the top and bottom with a delicate uniting curve. The sloping side of the echinus becomes flatter in the later examples, and in the Colosseum at Rome forms a quarter round (See the more complete discussion at Doric order).

In the Ionic capital (illustration, left), spirally coiled volutes are inserted between the abacus and the ovolo. In the Ionic capitals of the archaic Temple of Artemis at Ephesus (560 BCE) the width of the abacus is twice that of its depth, consequently the earliest Ionic capital known was virtually a bracket capital. A century later, in the temple on the Ilissus, the abacus has become square (See the more complete discussion at Ionic order).

It has been suggested that the foliage of the Greek Corinthian capital was based on the Acanthus spinosus, that of the Roman on the Acanthus mollis. Not all architectural foliage is as realistic as Isaac Ware's (illustration, right) however. The leaves are generally carved in two 'ranks' or bands, like one leafy cup set within another. One of the most beautiful Corinthian capitals is that from the Tholos of Epidaurus (400 BCE); it illustrates the transition between the earlier Greek capital, as at Bassae, and the Roman version that Renaissance and modern architects inherited and refined (See the more complete discussion at Corinthian order).

In Roman architectural practice, capitals are briefly treated in their proper context among the detailing proper to each of the 'Orders', in the only complete architectural textbook to have survived from classical times, the Ten Books on Architecture, by Marcus Vitruvius Pollio, better known just as Vitruvius, dedicated to the emperor Augustus. The various orders are discussed in Vitruvius' books iii and iv. Vitruvius describes Roman practice in a practical fashion. He gives some tales about the invention of each of the Orders, but he does not give a hard and fast set of canonical rules for the execution of capitals.

Two further, specifically Roman orders of architecture have their characteristic capitals, the sturdy and primitive Tuscan capitals, typically used in military buildings, similar to Greek Doric, but with fewer small moldings in its profile, and the invented Composite capitals not even mentioned by Vitruvius, which combined Ionic volutes and Corinthian acanthus capitals, in an order that was otherwise quite similar in proportions to the Corinthian, itself an order that Romans employed much more often than Greeks.

Indo-Corinthian capitals are capitals crowning columns or pilasters, which can be found in the northwestern Indian subcontinent, and usually combine Hellenistic and Indian elements. These capitals are typically dated to the first centuries of the Common Era, and constitute important elements of Greco-Buddhist art.

The Classical design was often adapted, usually taking a more elongated form, and sometimes being combined with scrolls, generally within the context of Buddhist stupas and temples. Indo-Corinthian capitals also incorporated figures of the Buddha or Bodhisattvas, usually as central figures surrounded by, and often under the shade of, the luxurious foliage of Corinthian designs.

A capital from Philippi (Archeology Museum)

Eastern Romanesque or Byzantine capitals are of endless variety. The Classical Roman composite capital would seem to have been the favourite type they followed at first. Subsequently the block of stone was left rough as it came from the quarry, and the sculptor evolved new designs to his own fancy, so that one rarely meets with many repetitions of the same design. One of the most remarkable designs features leaves carved as if blown by the wind; the finest example being at the 8th-century Hagia Sophia (Thessaloniki). Those in the Cathedral of Saint Mark, Venice (1071) specially attracted John Ruskin's fancy. Others appear in Sant'Apollinare in Classe, Ravenna (549).

The capital in San Vitale, Ravenna (547) shows above it the dosseret required to carry the arch, the springing of which was much wider than the abacus of the capital. On eastern capitals the eagle, the lion and the lamb are occasionally carved, but treated conventionally.

In Romanesque architecture and Gothic architecture capitals throughout western Europe present as much variety as in the East, and for the same reason, that the sculptor evolved his design in accordance with the block he was carving, but in the west variety goes further, because of the clustering of columns and piers.

The earliest type of capital in Lombardy and Germany is known as the cushion-cap, in which the lower portion of the cube block has been cut away to meet the circular shaft. These types were generally painted at first with geometrical designs, afterwards carved.

The finest carving comes from France, especially from the area around Paris. The most varied were carved in 1130-1170. These have been copiously illustrated in five volumes in The Ark of God by historian John James.[1]

In Britain and France the figures introduced into the capitals are sometimes full of character. These capitals, however, are not equal to those of the Early English Period, in which foliage is treated as if copied from metalwork, and is of infinite variety, being found in small village churches as well as in cathedrals.

In the Renaissance period the feature became of the greatest importance and its variety almost as great as in the Romanesque and Gothic styles. The flat pilaster, which was employed extensively in this period, called for a planar rendition of the capital, executed in high relief. This affected the designs of capitals. A traditional 15th-century variant of the Composite capital turns the volutes inwards above stiffened leaf carving. In new Renaissance combinations in capital designs most of the ornament can be traced to Classical Roman sources.

The 'Renaissance' was as much a reinterpretation as a revival of Classical norms. For example, the volutes of ancient Greek and Roman Ionic capitals had lain in the same plane as the architrave above them. This had created an awkward transition at the corner - where, for example, the designer of the temple of Athena Nike on the Acropolis in Athens had brought the outside volute of the end capitals forward at a 45-degree angle. This problem was more satisfactorily solved by the 16th-century architect Sebastiano Serlio, who angled outwards all volutes of his Ionic capitals. Since then use of antique Ionic capitals, instead of Serlio's version, has lent an archaic air to the entire context, as in Greek Revival.

Within the bounds of decorum, a certain amount of inventive play has always been acceptable within the classical tradition. When Benjamin Latrobe redesigned the Senate Vestibule in the United States Capitol in 1807, he introduced six columns that he 'Americanized' with ears of corn (maize) substituting for the European acanthus leaves. As Latrobe reported to Thomas Jefferson in August 1809,

"These capitals during the summer session obtained me more applause from members of Congress than all the works of magnitude or difficulty that surround them. They christened them the 'corncob capitals'."