Frankenstein and the Monster from Hell

Frankenstein and the Monster from Hell

Infobox Film
name = Frankenstein and the Monster from Hell 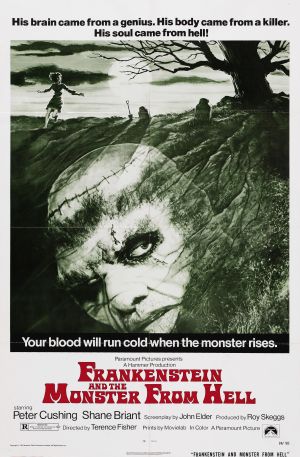 "Frankenstein and the Monster From Hell" is a 1974 British from . It was directed by and starred and . It was the final chapter in Hammer's Frankenstein series of films, and director Fisher's final feature.

This was Hammer's final Frankenstein entry. Some fans of the genre and of Hammer films in particular see it as a masterful work, while others consider it a low point in Hammer film production.

The ultra low budget does show in 's claustrophobic sets and unconvincing , and the monster's costume is obviously a pull-over mask designed by (though the monster is unique in the annals of Frankenstein cinema). But Fisher's direction and Cushing's consummate performance (this time portraying the character as completely mad) are examples of true dedication to this type of cinema, and the confinement of the asylum only adds to the doomed, somber mood. Prowse, who is now universally better known as the man who played (but did not voice) and who essayed the role of the monster in "", is able to give the part some empathy.

In this final film in the series, Baron Victor Frankenstein (Cushing) is housed at an insane asylum. He has been made a surgeon at the asylum, and has a number of privileges, as he holds secret information on the asylum's corrupt director (). The Baron, under the alias of Dr. Carl Victor, uses his position to continue his experiments in the creation of man.

When Simon Helder (), a young doctor and fan of the Baron's work, arrives as an inmate, the Baron takes him under his wing as an apprentice. Together they work on a new creature. Unbeknownst to Simon, however, Frankenstein is acquiring body parts by murdering his patients. When the creature - lumbering, hirsute and dumb - is complete, it is bitter and intent on revenge.

The Baron's new experiment is the hulking, ape-like Herr Schneider (), a homicidal inmate whom he has kept alive after a violent suicide attempt and on whom he has grafted the hands of a recently deceased sculptor, (). Since Frankenstein's hands were badly burnt in the name of science, the shabby stitch-work was done by Sarah (), a beautiful mute girl who assists the surgeon, and who is nicknamed "". When Simon tells the Baron that he is a surgeon, the problem is solved.

Soon new eyes and a new brain are given to the creature in horror gore fashion. The creature ultimately runs amuck in the insane asylum. The monster is eventually destroyed by a mob of inmates. Simon is devastated by the loss of life and reports to Frankenstein; however, Frankenstein felt that it was the best that could happen to such a creature, and is already considering a new experiment with other involuntary donors.

*Directed by
*Screenplay by Anthony Hinds (aka John Elder)
*Produced by
*Director of photography: , B.S.C.
*Music by
*Musical supervisor:
*Edited by
*Art direction by
*Production manager: Christopher Neame
*Make-up by