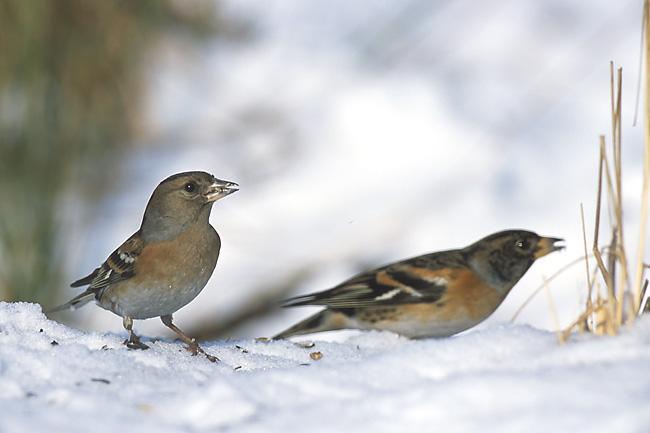 This bird is widespread throughout the forests of northern and . It is migratory, wintering in southern Europe, north , , north , and . It regularly strays into during migration and may continue as far south as the western .

Open ous or birch woodland is favoured for breeding. It builds its nest in a tree fork, and decorates the exterior with moss or to make it less conspicuous. It lays 4-9 eggs.

This species can form large flocks outside the breeding season, sometimes mixed with es. These large gathering occur especially if there is a good supply of nuts. The food is seeds, but unlike most finches, the young are fed extensively on insects.

The Brambling is similar in size and shape to a Chaffinch. Breeding-plumaged male Bramblings are very distinctive, with a black head, dark upperparts, orange breast and white belly. Females and younger birds are less distinct, and more similar in appearance to some Chaffinches. In all plumages, however, Bramblings differs from Chaffinches in a number of features: (i) Brambling has a white rump whereas that of Chaffinch is grey-green; (ii) the breast is orange, contrasting with a white belly on Brambling, whereas on Chaffinch the underparts of more uniformly coloured (pink or buff); (iii) Brambling's scapulars are orange, whereas Chaffinch's are grey or grey-brown; (iv) the flanks are dark-spotted on Brambling, plain on Chaffinch; (v) Bramblings lack the white outer tail feathers of Chaffinch. An additional difference for all plumages except breeding-plumaged males is the bill colour - yellow in Brambling, dull pinkish in Chaffinch (breeding-plumaged male Bramblings have black bills, Chaffinches in the corresponding plumage have grey bills). [Svensson, Lars, Peter Grant, Killian Mullarney & Dan Zetterstrom (1999) The Collins Bird Guide]

*In the Trilogy the character is named after the Brambling. It is translated into Atori.