The Life of David Gale

The Life of David Gale 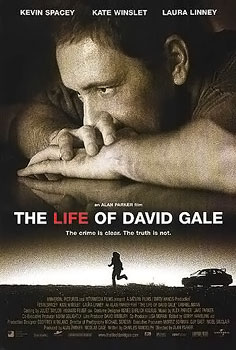 "The Life of David Gale" is a 2003 that tells the fictional story of a professor, David Gale, who was dedicated to the abolition of the death penalty and who was sentenced to death for the and of a colleague and fellow abolitionist. The film was directed by and stars as Gale and as Bitsey Bloom, the young journalist whom Gale commissions to prove his innocence. also stars as the victim.

Some time before the current timeline of the movie, David Gale was the head of the philosophy department at the (fictional) University of Austin and the author of several well-regarded books; he was also an active and visible member of Deathwatch, an anti-capital punishment activist group. One night at a graduation party, an inebriated David was seduced by Berlin, an attractive student from his class; earlier he had refused her advances to raise her failing grade, resulting in her expulsion from school. She then used the physical evidence of their sexual encounter to falsely accuse Gale of rape in revenge. While Berlin dropped the charges and fled town shortly afterwards, the negative publicity cost him his career as an educator and activist, and his marriage; with no wife and no job, Gale turned to drinking.

One of Gale’s best friends was Constance Harraway, a fellow Deathwatch activist with whom he became particularly close, especially after Gale’s wife, Sharon, left with their son to ; the custody laws there favor the mother and her father was the American , effectively shutting Gale out of his child’s life. When Harraway was found raped and murdered a few years later, Gale was charged with the crime, and convicted despite the best efforts of his well-meaning but ineffectual lawyer Braxton Belyeu. Now Gale awaits execution, and less than a week before his date with the fatal injection, Gale agrees — for a substantial fee — to tell his story with Bitsey Bloom, a nervy journalist from a major news magazine who arrives with the office intern, Zack Stemmons. As Bloom discusses the facts of the Harraway murder with Gale, it becomes clear to her that the details simply do not add up. A mysterious stranger slips evidence to her that suggest Gale has been framed—leaving Bloom and Stemmons only a few days to solve the mystery and save Gale from execution.

As their investigation proceeds, the implication that the rapist videotaped the assault is replaced by the revelation that Harraway recorded herself committing suicide, since she was going to die soon regardless from an ongoing battle with cancer. The video showing the suicide isn’t found until moments before Gale’s death; in a frenzy, Bloom struggles by car, and then by foot to present the evidence to stop the execution. Unfortunately, she doesn’t reach the courthouse in time, and Gale dies an innocent man. The tape is released after his death, resulting in a media and political uproar.

In an epilogue, the mysterious stranger delivers Gale’s interview fee from the magazine to Gale’s wife in Spain, along with a postcard from Berlin confessing to and apologizing for the rape incident. Another videotape is delivered to Bloom, labeled "Off the Record": Dusty Wright—the mysterious stranger, who once also belonged to Deathwatch but was asked to leave the organization due to his extremist beliefs, is the first to see Harraway’s body. Once it is confirmed that Harraway has died, he calls Gale. Once in her home, Gale intentionally leaves his thumb print on the plastic bag which Harraway used to suffocate herself. This way he could be executed and then proven innocent (according to the first tape), giving evidence of the injustices in capital punishment. It appears that the three — and is implied that even Gale’s "ineffectual" attorney — meticulously planned everything.

Reviews were generally negative. [Critic compiler website rated the film 31 out of 100, indicating "generally negative reviews." See [http://www.metacritic.com/video/titles/lifeofdavidgale?q=life%20of%20david%20gale Metacritic entry] . gave it only a 20% "fresh" (positive) rating; only 15% among those the site identified as "Top Critics." See [http://www.rottentomatoes.com/m/life_of_david_gale/ Rotten Tomatoes entry] .]
movie critic gave it zero stars, his lowest rating, and stated, "I am sure the filmmakers believe their film is against the death penalty. I believe it supports it and hopes to discredit the opponents of the penalty as unprincipled fraudsters... But while Texas continues to warehouse condemned men with a system involving lawyers who are drunk, asleep or absent; confessions that are beaten out of the helpless, and juries that overwhelmingly prefer to execute black defendants instead of white ones, you can't make this movie. Not in Texas." Wrote Ebert, "Spacey and Parker are honorable men. Why did they go to Texas and make this silly movie? The last shot made me want to throw something at the screen--maybe Spacey and Parker." [ [http://rogerebert.suntimes.com/apps/pbcs.dll/article?AID=/20030221/REVIEWS/302210304/1023 Reviews: The Life Of David Gale] By Roger Ebert. February 21, 2003 (0 stars)] However, Ebert's co-host on the television show "Ebert & Roeper", Richard Roeper, did not hesitate to give the movie a "thumbs up" rating.