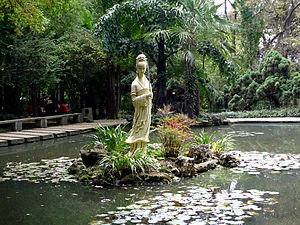 Statue of Chen Yuanyuan in Gold Hall Park in Kunming

Chen Yuanyuan (simplified Chinese: 陈圆圆; traditional Chinese: 陳圓圓; pinyin: Chén​ Yuán​yuán​; 1624–1681), born Xing Yuan (邢沅),[1] lived near the end of the Ming Dynasty, and was a concubine of Wu Sangui. Her courtesy name was Wanfen (Chinese: 畹芬). Her actual historical significance is disputed, although it is largely believed that Chen was pivotal in Wu Sangui's campaigns after the fall of the Ming.[2] She was one of the 8 beauties in Jiangnan(江南八豔). She is compared to Helen of Troy[citation needed].

Chen Yuanyuan was born to a peasant family, and on the death of her father, she became a courtesan. Due to her beauty and singing ability, she became a lead figure in opera in Suzhou.[3] Fearing for her life due to an abduction attempt, she became the concubine of Mao Xiang.

In 1642, Chen was abducted by the Tian Hongyu family where she became the singing courtisan. She then moved into the possession of Wu Sangui, though how is unclear - she may have been purchased by Wu's father[3] or given as a gift by Tian.[1]

In April 1644, Beijing fell to a rebel army led by Li Zicheng. Chongzhen gathered the entire imperial household and ordered them, except for his sons, to commit suicide. The Empress hanged herself. Princess Chang Ping refused. In a fit of rage Chongzhen had her left arm cut off. He then fled to nearby Jingshan Park(景山公園), where he hanged himself on the famous Guilty Chinese Scholartree(罪槐). Chen Yuanyuan reluctantly assisted by helping him up to the noose, according to some accounts.

Li established what he called the Shun Dynasty, but it fell to the Manchus at the end of May. Seizing their chance, the Manchus crossed the Great Wall after Wu Sangui opened the gates at Shanhai Pass. They quickly overthrew Li, who fled the Forbidden City.