Mulhouse
"Mülhausen" redirects here and should not be confused with Mühlhausen.

Mulhouse (French: Mulhouse, pronounced: [myluz]; Alsatian: Milhüsa or Milhüse, [mɪlˈyːzə]; German: Mülhausen; i.e. mill hamlet) is a city and commune in eastern France, close to the Swiss and German borders. With a population of 110,514[1] and 278,206 inhabitants in the metropolitan area[2] in 2006, it is the largest city in the Haut-Rhin département, and the second largest in the Alsace region after Strasbourg. Mulhouse is the principal commune of the 32 making up the Communauté d'agglomération Mulhouse Alsace Agglomération (MAA, population 252,000).[3]

Mulhouse is famous for its museums, especially the Cité de l’Automobile (also known as "Musée national de l’automobile") and the Musée Français du Chemin de Fer (also known as "Cité du train"), respectively the largest automobile and railway museums in France. An industrial town nicknamed "the French Manchester",[4] Mulhouse is also the main seat of the Upper Alsace University, where the secretariat of the European Physical Society can be found.

Mulhouse is the chief city of an arrondissement of the Haut-Rhin département, of which it is a sub-prefecture.

Legends mention the origin of the town in 58 BC, but the first written records of Mulhouse date from the twelfth century. It was part of the southern Alsatian county of Sundgau in the Holy Roman Empire. From 1354–1515 Mulhouse was part of the Décapole, an association of ten Free Imperial Cities in Alsace. The city joined the Swiss Confederation as an associate in 1515 and was therefore not annexed by France in the Peace of Westphalia in 1648 like the rest of the Sundgau. An enclave in Alsace, it was a free and independent republic associated with the Swiss Confederation until, after a vote by its citizens on 4 January 1798, it became a part of France in the Treaty of Mulhouse signed on 28 January 1798, during the Directory period of the French Revolution.

After the Prussian victory in the Franco-Prussian War and the Otto von Bismarck engineered unification of Germany under Prussian King William I as the new German Kaiser, Mulhouse was annexed to the German Empire as part of the territory of Alsace-Lorraine (1870–1918). The city was briefly occupied by French troops on 8 August 1914 at the start of World War I, but they were forced to withdraw two days later in the Battle of Mulhouse. Alsace-Lorraine was invaded and reacquired by France after World War I. Although never formally annexed by Germany after the Battle of France in 1940, it was occupied by German forces until returned to French control at the end of the war in 1945.

The town's development was stimulated first by the expansion of the textile industry and tanning, and subsequently by chemical and engineering industries from the mid 18th century. Mulhouse was for a long time called the French Manchester. In consequence, the town has enduring links with Louisiana, from which it imported cotton, and also with the Levant. The town's history also explains why its centre is relatively small.

Two rivers run through Mulhouse, the Doller and the Ill, both tributaries of the Rhine.

Medieval Mulhouse consists essentially of a lower and an upper town. 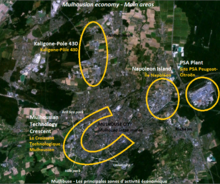 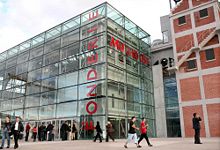 As early as the mid-19th century, Mulhouse was known as "the industrial capital of Alsace", the "city with a hundred chimneys" (cité aux cent cheminées) and "the French Manchester"[5]

Mulhouse has its own SNCF station, Gare de Mulhouse, with a direct connection to Basel in Switzerland and several other regional and national destinations, including Paris, Strasbourg, Lyon and Besançon.

Transport within Mulhouse is provided by Soléa and comprises a network of buses together with the city's tram network, which opened on 13 May 2006 and was due to be further extended by 2008.

Mulhouse was the birth place of:

Mulhouse is twinned with: