The 9th century is the period from 801 to 900 in accordance with the Julian calendar in the Christian/Common Era.

A bronze ceremonial vessel made around the 9th century, one of the bronzes found at Igbo-Ukwu.[1]

For more details on this topic, see Archaeology of Igbo-Ukwu.

Around the 9th century the Igbo people of what is now southeastern Nigeria, develop bronze casts of humans, animals and mythical creatures. These bronzes which were used as vessels, amulets, pendants and sacrificial tools, are among some of the earliest made bronzes ever found in Nigeria. Most items were part of a burial of a nobleman, stemming form the Nri-Igbo culture in the northern part of Igboland. Long distance trading was also discovered through the thousands of glass beads found at the sites. The discovery of the bronzes were made by locals from Igbo Ukwu and they mark the start of the development of the Nri Kingdom.

Britain experienced a great influx of Viking peoples in the 9th century as the Viking Age continued from the previous century. The kingdoms of the Heptarchy were gradually conquered by the Danes, who set up Anglo-Saxon puppet rulers in each kingdom. This invasion was achieved by a huge military force known as the Great Heathen Army which was supposedly led by Ivar the Boneless, Halfdan Ragnarsson and Guthrum. This Danish army first arrived in Britain in 865 in East Anglia. After conquering that kingdom, the army proceeded to capture the city of York (Jorvik) and establish the kingdom of Jorvik. The Danes went on to subjugate the kingdom of Northumbria, and take all but the western portion of Mercia. The remaining kingdom of Wessex was the only kingdom of the Heptarchy left. Alfred the Great managed to maintain his kingdom of Wessex and push back the Viking incursions, relieving the neighbouring kingdoms from the threat of the Danes following his famous victory over them at the Battle of Ethandun in 878. Alfred re-established Anglo-Saxon rule over the western half of Mercia, and the Danelaw was established which separated Mercia into halves, the eastern half remaining under the control of the Danes.

Europe in the 9th century

Ireland was affected also by the Viking expansion across the North Sea. Extensive raids were carried out all along the coast, and eventually permanent settlements were established, such as that of Dublin in 841. Particular targets for these raids were the monasteries on the western coast of Ireland, as they provided a rich source for loot. On such raids the Vikings set up impermanent camps, which were called longphorts by the Irish. This period of Viking raids on the coasts of Ireland has been named the longphort phase after these particular types of settlements. Ireland in the 9th century was organised into an amalgam of small kingdoms, called tuatha. These kingdoms were sometimes grouped together and ruled by a single, provincial ruler. If such a ruler could establish and maintain authority over a portion of these tuatha, he was sometimes granted the title of High King (see High King of Ireland).

Scotland experienced significant Viking incursions during the 9th century also. The Vikings established themselves in coastal regions, usually in northern Scotland, and in the northern islands such as Orkney and Shetland. The Viking invasion and settlement in Scotland provided a contributing factor in the collapse of the kingdoms of the Picts, who inhabited most of Scotland at the time. Not only were the Pictish realms either destroyed or severely weakened, the Viking invasion and settlement may have been the reason for the movement of Kenneth MacAlpin, the king of Dál Riata at that time. The kingdom of Dál Riata was located on the western coast of Scotland, and Viking incursions destroyed it after the death of its previous king, Áed mac Boanta in 839, according to the Annals of Ulster. This may have caused the new king, Kenneth MacAlpin, to move to the east, and conquer the remnants of the Pictish realms. Kenneth MacAlpin became king of the Picts in 843 and later kings would be titled as the King of Alba or King of Scots.

Art of the Early Middle Ages

First and foremost, art was dedicated to the Church. The basic tools of the Roman Catholic mass, thousands of golden art objects were made. Sacred cups, vessels, reliqueries, crucifixes, rosaries, altar pieces, and statues of the Virgin and Child or Saints all kept the flame of art from dying out in the period. Architecture began to revive to some extent by the 9th century. It took the form of Church facilities of all kinds, and the first castle fortifications since Roman times began to take form in simple "moat and baily" castles, or simple "strong point" tower structures, with little refinement.

Eastern Hemisphere at the beginning of the 9th century.

Eastern Hemisphere at the end of the 9th century. 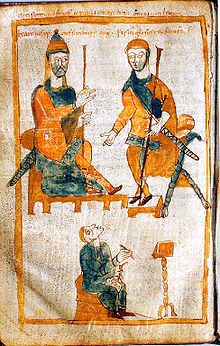 Charlemagne (left) and Pippin the Hunchback. 10th-century copy of a lost original from about 830. 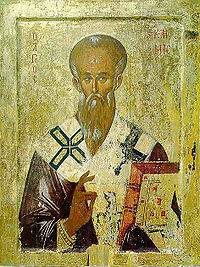