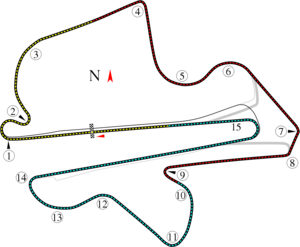 Fast_Country = Spain
First_Driver =
First_Team = Renault
First_Country = Italy
Second_Driver =
Second_Team = Renault
Second_Country= Spain
Third_Driver =
Third_Team = Honda
Third_Country = UKThe 2006 Malaysian Grand Prix was the second Grand Prix of the 2006 season. The race took place on .Qualifying on Saturday saw the new rules being put to the test, as , , , and were all forced to swap engines from the Bahrain GP and therefore lost 10 places on the starting grid after qualifications, despite many of them competing in later sessions (Massa actually changed his engine twice, causing him to lose 20 places). This meant some drivers, such as the Toro Rosso's of and were eliminated in the first session, but would have been spared elimination had those with engine penalties been eliminated at this point (although Ralf Schumacher's engine blew during the last session). It was interesting that three cars with the Ferrari V8 suffered from engine problems during qualifying.

The first session gave no surprises, as the Super Aguri, Midland and Toro Rosso cars all went out, while the second session saw another set of poor performances from and , while Massa and Coulthard also went out along with both the Sauber cars. In the final pole position session, Ralf Schumacher's engine blew, while could only manage 7th place after engine penalties, but a problem with his fuel calculation meant he was carrying too much fuel during the session. was tipped as a favourite having qualified 6th, while put himself on the third row alongside his teammate in 5th. The two big surprises of qualifying were and in their Williams. Rosberg posted the third fastest time, while Webber was moved up to 4th after Michael Schumacher's engine penalty dropped him to 14th. took provisional pole, but it was who ended the session in 1st with his Renault, demoting Button to 2nd.

The race began with Rosberg and Webber being caught out by Alonso coming into the first corner, who managed to grab 3rd from his starting position. Fisichella and Button maintained their spots, but further back Räikkönen's day ended early having been hit by during the first lap. Klien's car was badly damaged, but the Red Bull mechanics repaired the car enough to send it back out, although he later retired due to a hydraulics problem. More problems followed for the better qualifiers, as Rosberg's engine blew on the 6th lap, while Webber also retired nine laps after his teammate. Further down the field, Massa and the Schumacher brothers made their way up the field throughout the day. The lead was only held by three people throughout the race, with Alonso's fuel problems actually giving him the advantage over Button, with Alonso managing to take second by staying out longer.

Several other cars retired during the race, with only 14 cars remaining at the end. managed to finish another race in his Super Aguri. Ralf Schumacher managed to get his Toyota into 8th place, having started dead last. Schumacher threatened towards the end laps, but was not able to pass for 7th. The two Ferrari’s were able to pull themselves into 5th and 6th place, but it was Massa who claimed the higher spot, beating Michael Schumacher despite pressure at the end. Juan Montoya was unspectacular once again, but another strong performance allowed him to reach 4th.

After the pit stops were completed, it was never doubted that Fisichella would win, and with Button slowing off the pace, content with third, it fell to Renault to pick up their first one-two finish as a constructor since the , with the World Champion going clear at the top of the points table by seven points, despite only finishing second to Fisichella.

Even among the drivers who took engine penalties, a variety of strategies were attempted - stopped 3 times during the Grand Prix while stopped once.