Labuan
For the Australian warships named after the island, see HMAS Labuan.

Labuan is a federal territory in East Malaysia. It is an island off the coast of the state of Sabah. Labuan's capital is Victoria and is best known as an offshore financial centre offering international financial and business services via Labuan IBFC since 1990 as well as being an offshore support hub for deepwater oil and gas activities in the region. It is also a tourist destination for nearby Bruneians and scuba divers. The name Labuan derives from the Malay word labuhan meaning anchorage. 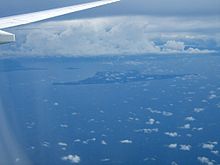 Labuan viewed from flight during descent to Kota Kinabalu

The Federal Territory of Labuan comprises Labuan Island (75 km²) and six other smaller islands (Pulau Burung, Pulau Daat, Pulau Kuraman, Pulau Papan, Pulau Rusukan Kecil, and Pulau Rusukan Besar), which have a combined total area of 91 km². The islands lie 8 km off the coast of Borneo, adjacent to the Malaysian state of Sabah and the independent state of Brunei Darussalam, on the northern edge of Brunei Bay facing the South China Sea. Labuan Island is mainly flat and undulating and the highest point is only 85 meters. Over 70% of the island is still covered with vegetation. Victoria, also Bandar Labuan in Malay, is the major town and faces Brunei Bay; access is via ferry service to Brunei and Kota Kinabalu, as well as Labuan Airport

The territory of Labuan is subdivided into administrative districts: 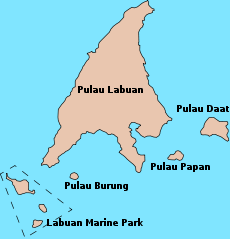 Labuan was a part of the Sultanate of Brunei.

In the 1840s the previously-uninhabited island was proposed as a base for British operations against piracy in the South China Sea. In 1846, Brunei was attacked and captured by the British and Sultan Omar Ali Saifuddin II was forced to sign a treaty and ceded Labuan to Britain in the same year. The island became a Crown Colony in 1848.[3] The first White Rajah of Sarawak, James Brooke was appointed first commander-in-chief and Governor of the territory. In 1849 the Eastern Archipelago Company became the first of many companies trying to exploit its coal deposits and establish it as a coaling station for the China trade. It later became a station for the submarine communications cable between Singapore and Hong Kong.

In 1890, Labuan came to be administered by the British North Borneo Chartered Company. It was reverted back to British government rule in 1904, then on 30 October 1906 joined to the Straits Settlements and been administered from Singapore.

During World War II, Labuan was occupied by Japan from December 1941 to June 1945 and governed as part of the Northern Borneo military unit by the Japanese 37th Army. Labuan was renamed Maida Island (Pulau Maida, 前田島 [Maeda-shima]) after Marquis Toshinari Maeda, the first commander of Japanese forces in northern Borneo. The liberation of Borneo began on 10th June 1945 when the Allied Forces under the command of General McArthur landed at Labuan with a convoy of 100 ships. The 9th Australian Division launched an attack supported by massive air and sea bombardments that resulted in the surrender of the Japanese. On 9 September 1945, General Masao Baba, commander of Japanese military, surrendered at the Layang-layang beach before Major General George F. Wooten, commander of Australian 9th Division Army. Labuan assumed its former name and was under British military administration along with the rest of the Straits Settlements, then joined to British North Borneo, on 15 July 1946, which in turn became a part of Malaysia as the state of Sabah in 1963.

In 1984, Labuan was ceded by Sabah to the federal government and made a federal territory. In 1990, it was declared an international offshore financial centre and free trade zone. The Labuan International Business and Financial Centre (Labuan IBFC) was created as Malaysia’s only offshore financial hub on October 1990 and was operating under the name of Labuan International Offshore Financial Centre (IOFC). At the time it was established to strengthen the contribution of financial services to the Gross National Product (GNP) of Malaysia as well as to develop the island and its surrounding vicinity. The jurisdiction, supervised by the Labuan Offshore Financial Services Authority or LOFSA, offers benefits such as 3% tax on net audited results or a flat rate of Malaysian Ringgit (MYR) 20,000 to trading companies; low operational costs; liberal exchange controls; and a host of other advantages including readily available, experienced and professional service providers. In 2010 the notion "offshore" was excluded from all the statutes of Labuan due to world pressure on the tax havens and offshores.

Since its inception, the jurisdiction has expanded to become a base for more than 6,500 offshore companies and more than 300 licensed financial institutions including world leading banks. Labuan IBFC is embarking on an aggressive growth strategy to become the premier international business and financial centre in the Asia Pacific region.

This island is governed by Datuk Yussof Haji Mahal from Barisan Nasional, which was elected during 12th General Election of Malaysia. Datuk Yussof Mahal won by 10471 votes, beating Lau Seng Kiat, an Independent, and Matusin Abdul Rahman by 1106. He is the Member of Parliament of Labuan, thus by tradition, also been appointed as Chairman of Labuan Corporation. The island also has a Senator, Datuk Yunus Kurus that also serves as Chairman of Labuan Corporation Advisory Council.

Defence is the responsibility of the federal government, with naval patrol vessels, a garrison and an air detachment based on the island. The vigilance of the local Coast Guard and Customs and Excise contribute to the maintenance of Labuan's reputation and status as an international offshore financial centre and free trade zone.

Attractions and places of interest

There are several attractions and places of interest on Labuan. The military cemetery contains various war graves and memorials to the fallen of World War II. This includes British, Australian, Indian, Sarawakian, Bruneian, North Borneo and Empire troops. There is also a memorial celebrating the surrender of the Japanese to the Australian Forces in 1945. There are also remnants of Labuan's history as a Royal Navy Coaling station, including 'the chimney', a well known local landmark. There is also a Labuan Maritime Museum.

Labuan is also the base for diving on four popular wreck dives: the Cement wreck, the American wreck, (the first USS Salute), the Australian wreck and the Blue Water wreck.[4]

A post office was operating in Labuan by 1864, and used a circular date stamp as postmark. The postage stamps of India and Hong Kong were used on some mail, but they were probably carried there by individuals, instead of being on sale in Labuan. Mail was routed through Singapore. From 1867 Labuan officially used the postage stamps of the Straits Settlements, then issued its own beginning in May 1879.

The first stamps of Labuan depict the usual profile of Queen Victoria, but are unusual for being inscribed in Arabic and Chinese scripts in addition to "LABUAN POSTAGE". Perennial shortages necessitated a variety of surcharges in between the several reprints and colour changes of the 1880s. The original stamps were engraved, but the last of the design, in April 1894, were done by lithography.

Beginning in May 1894, the designs of North Borneo were printed in different colours, with "LABUAN" either engraved into the vignette or overprinted. On 24 September 1896, the 50th anniversary of the cession was marked by overprinting "1846 / JUBILEE / 1896" on the overprinted North Borneo designs. Additional overprints appeared through the 1890s. In 1899 many types were surcharged with a value of 4 cents.

A last Labuan-only design came out in 1902, depicting a crown and inscribed "LABUAN COLONY". After incorporation into the Straits Settlements in 1906, Labuan ceased issuing its own stamps, although they remained valid for some time. Many of the remainders were Cancelled-to-order for sale to collectors, and are now worth only pennies; genuine postal uses are worth much more.