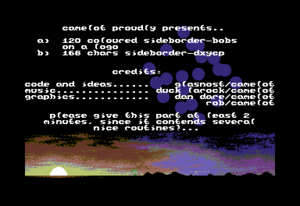 Borders - screen shot of the intro to the "Bobby Border" part of the "Camel Park" demo. Notice the borders in black. 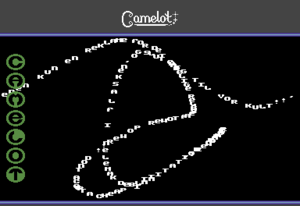 All borders removed - screen shot of one of the main effects in the "Bobby Border" part of "Camel Park". Notice how the sprites move into the borders. Also an example of the DXYCP (sprite-scroller) effect.

The Commodore 64 (C64) demos are demonstrations of what can be done to push the limits of the Commodore 64 computer, made by programmers, musicians and artists.

Though it was not unusual to find demos that displayed a single picture, only music tracks or a programming skill. Groups were formed that consisted of members who were skilled in composing music, drawing graphics and programming. Full disk demos were produced, some of which would play music as the next file loaded, without any delay in the sound.

Various effects are achieved in demos, most of them due to undocumented side-effects pertaining to the MOS Technology VIC-II chip. Some examples are:

Followers of the C64 would see the growth of the demo scene. Gone were the single file demos with one scrolling text and no music. Full disk demos were produced, some of which would play music as the next file loaded, without any delay in the sound.

Hidden parts were included as was the occasional game implemented into a demo.

When the Commodore Amiga appeared, many former C64 demo programmers switched platforms and continued to make demos for the Amiga (see Amiga demos). The Atari demos were also heavily influenced by C64 demos. In the United Kingdom, the main alternative demo scene was the one of ZX Spectrum demos.

The C64 was popular in a time when local BBSes were also popular and used to communicate with other people. Software trading via mail was also common. Some C64 enthusiasts lament the loss of the social interaction that locally centered computer activities provided.