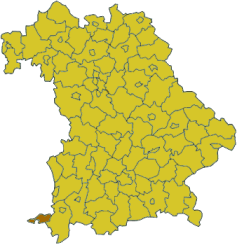 Lindau is a district in , . It is bounded by (from the east and clockwise) the district of , (federal state of ), and the state of (districts of Bodensee and Ravensburg).

The city of Lindau became a Free Imperial City in the 13th century, that means it was directly subordinate to the emperor. The rural areas around Lindau were property of monasteries or tiny counties, that emerged and sank in the region. When French troops under Napoleon entered the area, all these entities were dissolved. In 1806 the region fell to Bavaria.

The district of Lindau was established in 1938. After the Second World War it became part of the French zone of occupation, while the rest of Bavaria was under US-American occupation. In 1955 the district was reincorporated into Bavaria. The city of Lindau, which had been an urban district, became a part of the district in 1972.

In the southwest the district borders , more precisely its eastern part known as "Obersee". To the north the countryside rises to the hills of the western mountains.