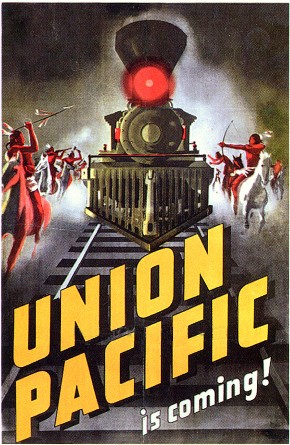 "Union Pacific" is a 1939 film about the building of the across the American West. The story is based upon the novel "Trouble Shooter", written by the prolific Western fiction author, .

One of the last bills signed by President Lincoln authorizes pushing the across the wilderness to , but financial opportunist Asa Barrows hopes to profit from obstructing it. Chief troubleshooter Jeff Butler has his hands full fighting Barrows' agent, gambler Sid Campeau; Campeau's partner Dick Allen is Jeff's war buddy and rival suitor for engineer's daughter Molly Monahan. Who will survive the effort to push the railroad through at any cost?

According to a news item in "", DeMille directed much of the film from a stretcher, because of an operation he had months earlier. However, studio records indicate DeMille collapsed from the strain of directing three units simultaneously, and used a stretcher for about two weeks.

The used at the ceremony to mark the end of the construction was the same spike actually used in the May 10, 1869 event, on loan from .

For the Indian attack on the train, Paramount hired 100 extras.

The company had rented many local s for the filming of the Indian attack on the train. During filming, however, local cowboys had to be hired to round up the horses, as they would scatter and sometimes stampede because of the noise and confusion of these scenes--all the shooting, yelling, and yards of unfamiliar cloth on the horses, along with kettles and other implements tied to their manes and tails, made them extremely nervous and uncomfortable, and it didn't require much to make them bolt.

In order to operate the number of trains required by the production, Paramount had to get a regulation railroad operating license from the .

This film is the official winner of the first ever at the , although this was awarded in retrospect at the 2002 festival. The festival was to debut in 1939, but was cancelled due to World War II. The organizers of the 2002 festival presented part of the original 1939 selection to a professional jury of six members. The films were: "Goodbye, Mr. Chips", "La piste du nord", "Lenin in 1918", "", "The Wizard of Oz", "Union Pacific" and "Boefje".

The world premiere in was a three-day celebration that drew 250,000 people, doubling the population of the city and requiring the National Guard to help keep order. A special train transported DeMille, Stanwyck, and McCrea from to Omaha. The trip took three days and made stops along the way, drawing large crowds. The film was shown in three theaters simultaneously; President was reported to have started the premiere proceedings by pressing a button in Washington, DC, which opened the civic auditorium. An ad stated that the premiere, which involved parades, radio broadcasts and a banquet, was the biggest in motion picture history. An antique train continued on a 15-day coast-to-coast promotional tour, stopping at 30 cities around the country.